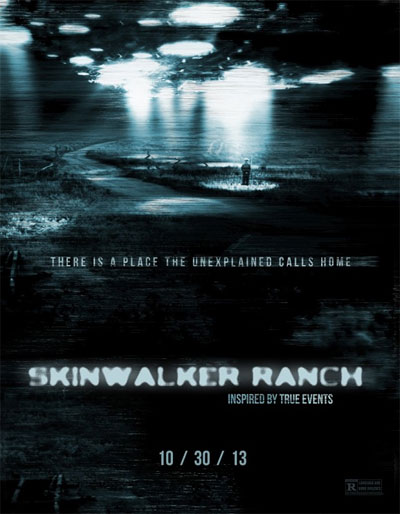 The filmmakers posted the following description with this video clip:

In 2010 Skinwalker Ranch gained media attention after experiencing a wide range of unexplained phenomena. Reports ranged from UFO sightings to livestock mutilation, but maybe most notable was the disappearance of ranch owner Hoyt Miller’s eight year old son, Cody on November 11, 2010. Close to a year later, Modern Defense Enterprises (MDE) has sent a team of experts to document and investigate the mysterious occurrences, which only escalate upon their arrival…

Although this ranch sounds like a mysterious and trilling place developed by creative Hollywood writers, Skinwalker Ranch actually exists. The sci-fi website GiantFreakinRobot.com describes that the ranch “is an area near Ballard, Utah where many reports of cattle mutilation, UFOs, and other strange phenomena have been reported for years. It’s located next to the Ute Indian Reservation, and skin-walkers have long been the talk of Native American legend, so you can see how the connections are made.”

For those familiar with the real Skinwalker Ranch, the “Modern Defense Enterprises” team referenced in the movie’s description sounds like a reference to Robert Bigelow’s National Institute for Discovery Science (NIDSci), which reportedly bought the ranch in 1996 to investigate reports of varied paranormal activity.

Deep Studios, a Utah production company, is the team behind the Skinwalker Ranch movie. The film will reportedly be released in theaters and available on-demand just before Halloween on October 30.