Witnesses watched a fireball UFO burn its way across the sky above Sandusky, Ohio on the night of Tuesday, October 4. 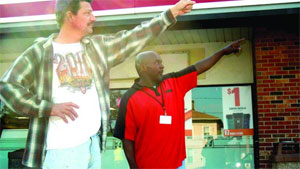 Witnesses watched a fireball UFO burn its way across the sky above Sandusky, Ohio on the night of Tuesday, October 4. Three men witnessed the burning object, including Robert Lowery, a 7-Eleven clerk, who saw the UFO when he was carrying cardboard boxes to the store’s dumpster. Lowery was hesitant to tell anyone about the event because of the stigma attached to UFOs. He explained to the Sandusky Register, “That’s one of those things–if there’s nobody else around to see it, you don’t go around talking about it. People will think you’re crazy.”

Two other men who were two blocks away from the 7-Eleven also witnessed the object in the sky. Daniel Harpst explained, “I looked up and this huge fireball went right over us . . . It was on fire and had a long streaming tail.” Harpst’s friend, Montee Prieur, added, “All I can tell you is it was a UFO.”

Harpst later came into the 7-Eleven where Lowery works, and asked the clerk if he had seen the fireball UFO. The two men shared their experiences and agreed that the object moved from the southwest to the northeast, and disappeared somewhere over Lake Erie after approximately four seconds.