Nation of Islam leader Louis Farrakhan asked that President Obama open up Area 51 to scientists in a sermon he gave on Saturday, February 15. It was the last of a yearlong sermon series titled, “Time and What Must Be Done.”

Farrakhan has often referred to a UFO he calls the Mother Wheel, which according to The New Yorker, he describes as a “heavily armed spaceship the size of a city that will rain destruction upon white America, but save those who embrace the Nation of Islam.”

In his recent sermon Farrakhan said, “We believe our words that we have shared on the presence of the Wheel could help the president and America to avert Allah’s warning of chastisement and destruction if America does not bow down.”

Apparently his suggestion to open Area 51 to scientist would help in those efforts, somehow.

According to The Blaze, who reported on Farrakhan’s recent plea to Obama, Farrakhan had described the Wheel and its destructive firepower in greater detail in 2011. 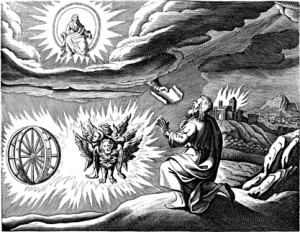 The final thing is the destruction. The Honorable Elijah Muhammad told us of a giant Mother Plane that is made like the universe, spheres within spheres. White people call them unidentified flying objects (UFOs). Ezekiel, in the Old Testament, saw a wheel that looked like a cloud by day, but a pillar of fire by night. The Hon. Elijah Muhammad said that that wheel was built on the island of Nippon, which is now called Japan, by some of the original scientists. It took 15 billion dollars in gold at that time to build it. It is made of the toughest steel. America does not yet know the composition of the steel used to make an instrument like it. It is a circular plane, and the Bible says that it never makes turns. Because of its circular nature it can stop and travel in all directions at speeds of thousands of miles per hour. He said there are 1,500 small wheels in this Mother Wheel, which is a half mile by-a-half-mile. This Mother Wheel is like a small human built planet. Each one of these small planes carry three bombs.

Soon after Farrakhan made this speech, he incorporated UFOs into the Nation of Islam’s Saviour’s Day convention. It ran at the same time as the International UFO Congress (IUFOC) in mid-February, and several of the speakers at the IUFOC attended both events. Mexican journalist and UFO researcher Jaime Maussan helped Farrakhan organize the UFO speeches at their event which was held in Chicago.

Farrakhan’s belief in the Mother Wheel has been met with a large amount of incredulity, but he has stuck to his story for years. The following is a video from ABC’s Nightline in 2008 in which Ted Koppel asks Farrakhan to explain his comments on the Mother Wheel, which Koppel describes as sounding “like gibberish.”