A full trailer for the upcoming extraterrestrial-themed film Earth to Echo was released on Wednesday, March 19. 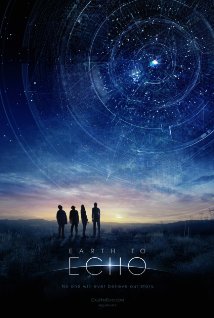 The plot of this movie might sound familiar. Movie news website /Film states, “Stop me if you’ve heard this one before: suburban kids who like to ride bikes find a cute little alien, then try to help the little guy get home even as adult Earth authorities close in on their discovery.” Based on the preview alone, there appears to be hints of E.T. The Extra-Terrestrial, The Goonies, and Super 8. And maybe even a little Batteries Not Included too, because the extraterrestrial appears to be some sort of intelligent robot.

After a construction project begins digging in their neighborhood, best friends Tuck, Munch and Alex inexplicably begin to receive strange, encoded messages on their cell phones. Convinced something bigger is going on, they go to their parents and the authorities. When everyone around them refuses to take the messages seriously, the three embark on a secret adventure to crack the code and follow it to its source. But taking matters into their own hands gets the trio in way over their heads when they discover a mysterious being from another world who desperately needs their help. The epic, suspenseful and exciting journey that follows will change all of their lives forever.

This movie is yet another addition to the found-footage genre. In the film, the kids decide to document their adventure, so the illusion is created that everything the viewer sees on screen was filmed by the kids.

Earth to Echo opens in theaters on July 2.