Home / Articles / Did Buzz Aldrin see a UFO on his way to the Moon?

“There was something out there that, uh, was close enough to be observed and what could it be?"

Did Buzz Aldrin see a UFO on his way to the Moon? 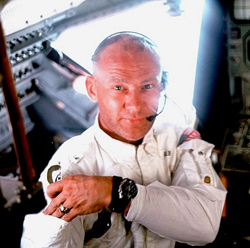 In an interview on the Science Channel in 2005, Apollo astronaut “Buzz” Aldrin said that the crew of the famous Apollo 11 mission had seen a UFO on their way to the moon. However, later Aldrin would say that his words were taken out of context, even though his story was supported on the program by senior Apollo 11 scientist, Dr. David Baker. Aldrin has also made other strange statements that some believe allude to Aldrin knowing more about an extraterrestrial presence in space than he would like to share.

In his 2005 interview Aldrin said, “There was something out there that, uh, was close enough to be observed and what could it be?… Mike (Collins) decided he thought he could see it in the telescope, and he was able to do that and when it was in one position, that had a series of ellipses, but when you made it real sharp, it was sort of L shaped. That didn’t tell us very much.”

Aldrin also said that they were careful as to how they reported it,”Now, obviously, the three of us were not going to blurt out, ‘Hey Houston we got something moving along side of us and we don’t know what it is, you know, can you tell us what it is?’. We weren’t about to do that, cause we know that those transmissions would be heard by all sorts of people and who knows what somebody would have demanded that we turn back because of Aliens or whatever the reason is, so we didn’t do that but we did decide we’d just cautiously ask Houston where, how far away was the S-IVB?”

The S-IVB was the first stage of the rocket taking their capsule out into space; it had been jettisoned 2 days prior. Mission control had responded that the S-IVB was 6000 nautical miles away. Aldrin said that because of the distance, they had decided that the object they were looking at was not the S-IVB, but something closer. They continued to observe the object until they fell asleep, but did not discuss it over the radio with mission command again until their debriefing when they got back home. 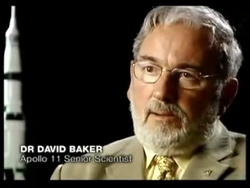 Dr. Baker confirmed, “NASA knew very little about, um, the object reported by the Apollo 11 crew. It was obviously an unidentified flying object, but such objects were not uncommon and the history of even earth orbit space flights going back over the previous years indicated that several crews saw objects.” He went on to say that others within NASA were also concerned about UFOs, “There were a lot of people within the program who went off later and became convinced that UFOs existed and that lead to some concern on NASA’s part where they got the agreement of the crew never to publicly talk about these things for fear of ridicule.”

Aldrin’s statements made some news after the documentary aired, enough so that he was interviewed on several shows, including FOX news, where he said, “We just about could have said, ‘Look, we see a UFO out the window going along with us.’ You know what would have happened? The public would have gone crazy. We were smart enough to say ‘where is the upper stage rocket? We think we might be looking at that out the window.”

In July of 2006 NASA’ Astrobiology site’s Ask an Astrobiologist section posted a response to the question of whether Aldrin really did see a UFO. Senior scientist at the NASA Astrobiology Institute (NAI), David Morrison, wrote: “I just talked to Buzz Aldrin on the phone, and he notes that the quotations were taken out of context and did not convey the intended meaning. After the Apollo 11 crew verified that the object they were seeing was not the SIVB upper stage, which was about 6000 miles away at that time, they concluded that they were probably seeing one of the panels from the separation of the spacecraft from the upper stage. These panels were not tracked from Earth and were likely much closer to the Apollo spacecraft. They chose not to discuss this on the open communications channel since they were concerned that their comments might be misinterpreted (as they are being now). Apparently all of this discussion about the panels was cut from the broadcast interview, thus giving the impression that they had seen a UFO.” 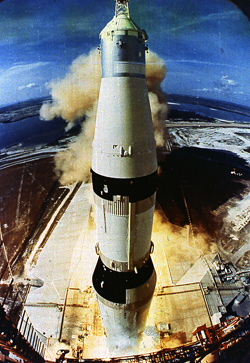 Aldrin appeared on Larry King in August of 2007 with ufologists and skeptics to talk further about this sighting. After a long explanation about rocketry, which he brought a model along to help demonstrate, King finally had to ask him to get to the point. Aldrin then gave a similar explanation that he had given Morrison. He said that he believes what they saw was probably one of those panels. Among the guests on the Larry King show was documentary maker James Fox. He has his own interesting story about his attempt to interview Aldrin on this issue.

On a recent interview with Open Minds radio, Fox told us the story of how he had found out about Aldrin’s UFO sighting, and his attempted interview with Aldrin to get the details. Fox played as an extra on the set of Mickey Rooney’s The Legend of O.B. Taggart. While talking with Mickey and Jan Rooney, Fox’s interest in UFOs was brought up, he feared that they would tease him but instead seemed very  interested. They even told Fox that they were friends with Buzz Aldrin and that he had something to share about a sighting he had. Fortunately, Fox happened to also be friends with Aldrin’s sister, Fay Ann Potter. So with the help of Potter and the Rooney’s, who all sent Aldrin letters on Fox’s behalf, after a few years of making requests, Aldrin finally granted an interview in 1999.

Aldrin told Fox to meet him in Monte Carlo, so Fox borrowed some funds to gather a crew and equipment to take to Monte Carlo. Unfortunately, after Fox and his crew arrived, Aldrin kept putting off the interview. Finally on the fourth day, Fox contacted Aldrin on the phone and explained that it was expensive to have this crew out there so he needed to get the interview done as soon as possible. Aldrin agreed to meet him the next morning in the lobby, but asked Fox not to bring a camera. The next morning, instead of Aldrin showing up in the lobby as planned, the concierge told Fox that he had a phone call. Over the phone Aldrin told Fox that he couldn’t do the interview. Shocked, after the expense of flying out there and putting up a crew for several days, Fox asked why. Aldrin told Fox that Paul Allen had just invested in the Search for Extraterrestrial Intelligence (SETI), and he was labeled a UFO nut. Aldrin explained that he could not jeopardize his initiative of getting funding for a rocket to send citizens into outer space. He then asked what difference his story would make anyway. Fox told him that it takes people of his caliber to come forward to take the phenomena out of the rut that it’s in. That didn’t sway Aldrin, he refused to do the interview. Fox was obviously very disappointed. 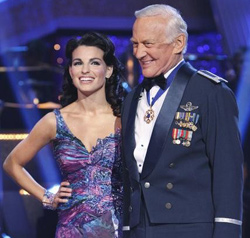 Ashly Costa and buzz Aldrin during his recent appearance on Dancing with the Stars (Credit: ABC).

Buzz’s interesting comments have not ended; on July of 2009 he was interviewed on CSPAN’s Washington Journal regarding the importance of space exploration. When speaking about one of the moons of Mars (presumably Phobos), he said “There is a monolith there. There is a very unusually structure on this little potato shaped object that goes around Mars once in seven hours. When people find out about that, they are going to say ‘Who put that there!? Who put that there!?’ Well, the universe put it there. If you choose, God put it there.” His point was that there are amazing discoveries to be made in space, but some speculate that he is implying that some of these discoveries may have to do with advanced civilizations from other worlds.

If Aldrin does know more than he is telling, just as he expressed to Fox in 1999, he doesn’t seem too keen on sharing any of it with the public. Other brave astronauts have come out with their stories of UFO sightings, and/or belief in extraterrestrial visitation, fellow Apollo astronaut Edgar Mitchell, and Mercury astronaut Gordon Cooper being two of the more famous. So it would not be unprecedented were Aldrin to share his experience. One wonders what stories he shared with the Rooney’s. Perhaps one day he will let the rest of us in on it. 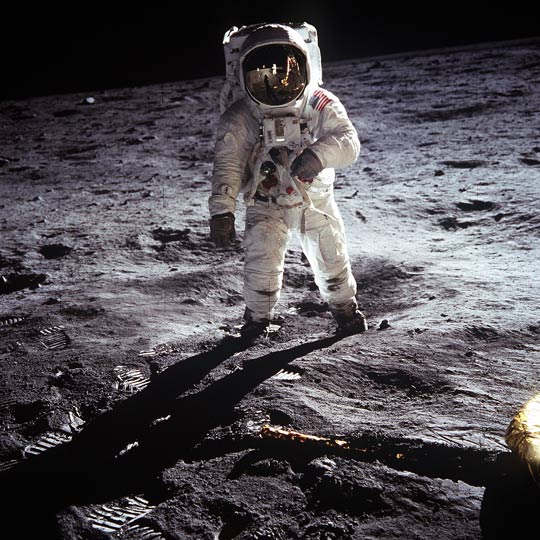 Aldrin on the moon during the Apollo 11 mission (Credit: NASA).