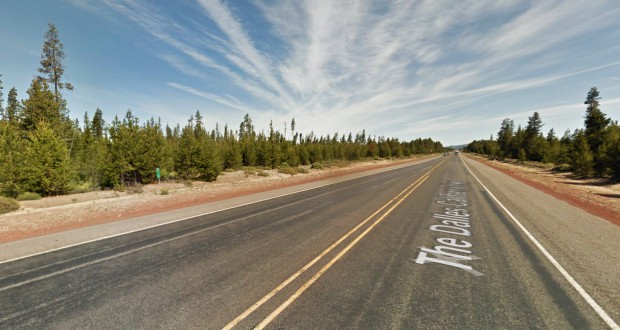 The Oregon witness saw the object at 100 feet in the air as it silently moved overhead. Pictured: Dalles-California Highway near Beaver Marsh, Oregon. (Credit: Google)

An Oregon witness at Beaver Marsh reported watching a silent, diamond-shaped UFO, moving overhead about 100 feet in altitude, according to testimony in Case 61431 from the Mutual UFO Network (MUFON) witness reporting database.

The witness stepped outside from a parked travel trailer along Highway 97 just southeast of the Diamond Lake Junction turn off about 6:45 p.m. on November 9, 2014, when the object was first seen coming from the south.

“It was before the moon had appeared on the horizon and the sky was very dark,” the witness stated. “The stars that night were very bright. When I looked up to the south I was looking directly at a metal tower of some sort (radio-telephone) with a red light on top. There was some illumination from a billboard in front of the tower.”

“I saw a silent shape move very slowly – perhaps 25 mph (guess) fly over the tower and my head and continue to the north. I was only able to see the UFO from roughly 60 yards away to the south and 60 yards away to the north. I could only see a moving blur until the object was directly overhead and the stars in the background were covered up as the shape passed between them and me. It was then I could see the outline of the craft. It appeared to be a diamond shape.”

The witness believes that if the stars were not visible, the object might not have been seen. 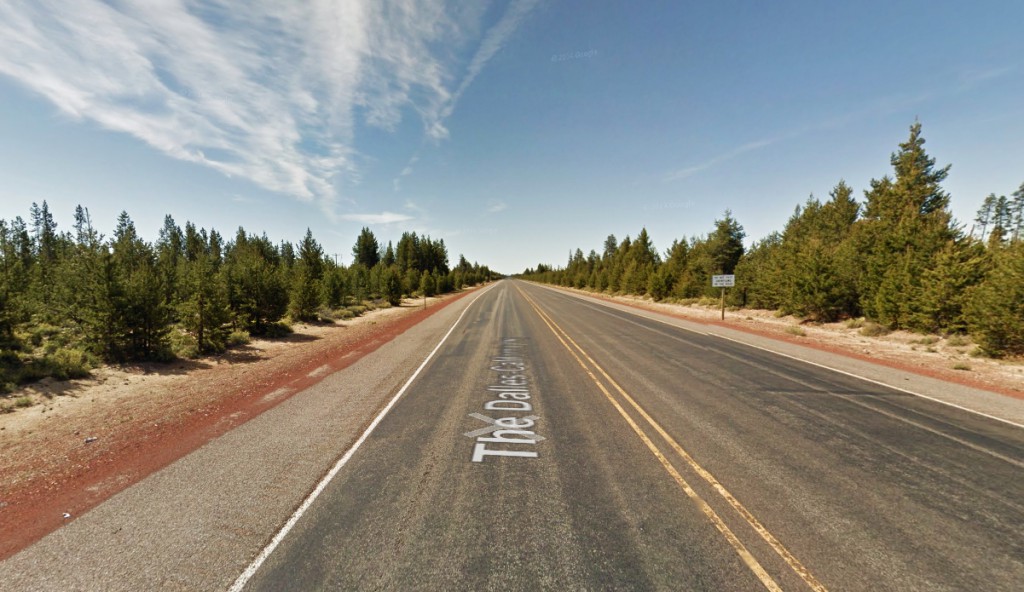 The object had a wing span between 25 and 50 feet. Pictured: Dalles-California Highway near Beaver Marsh, Oregon. (Credit: Google)

“I would guess its wing span was 25 foot to 50 foot max. I was so excited and in shock it is hard to say for sure on the size. I was very excited and not at all scared like one may think. I was wishing I could have watched it longer.”

The witness is unsure what the object was.

“If I was to guess I would say it must have been military or a drone, but the fact it was completely silent has me puzzled.”

Beaver Marsh is an unincorporated community in Klamath County, Oregon.

Oregon has a current UFO Alert Rating of 3 with an average number of recent reports nationally. Oregon had 10 UFO reports that occurred during October 2014 – calculated at 2.62 sightings per million population.