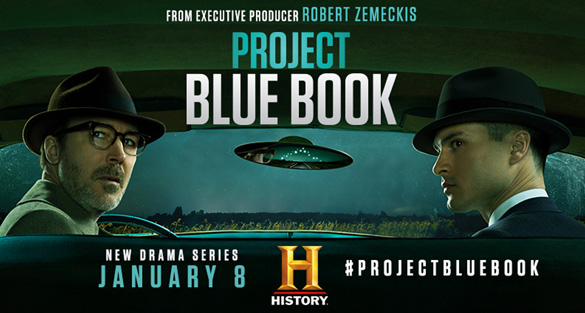 Open Minds UFO Radio: David O’Leary is the creator, a writer, and producer of History Channel’s upcoming series Project Blue Book. David’s passion for the UFO topic inspired him to create this series based on the U.S. government’s most famous UFO investigation, Project Blue Book. The series is fiction, but is based on real cases investigated in Project Blue Book and the two U.S. Air Force UFO investigations that came before it, Project Sign and Project Grudge. The main character is named and modeled after Dr. J. Allen Hynek, an astronomer who aided in the government investigations. Aidan Gillen (Game of Thrones) plays Dr. Hynek, and Oscar-winner Robert Zemeckis (Back to the Future, Contact) serves as an Executive Producer. The series premieres on January 8, 2019. David is also a Co-Producer on the horror film Eli, which Netflix will release in 2019 and an Associate Producer on Parallel, a sci-fi thriller from Bron Studios also set for a 2019 release.

In this episode, we discuss how David was able to get the show produced, his interest in the UFO topic, and his thoughts about the real-life UFO cases portrayed in the series. We also discuss how to balance the fiction with the facts while trying to entertain and represent real people and events as accurately as possible.

Project Blue Book premieres on the History Channel on January 8, 2018, at 9 pm central.

For more information about the show, visit: https://www.history.com/shows/project-blue-book