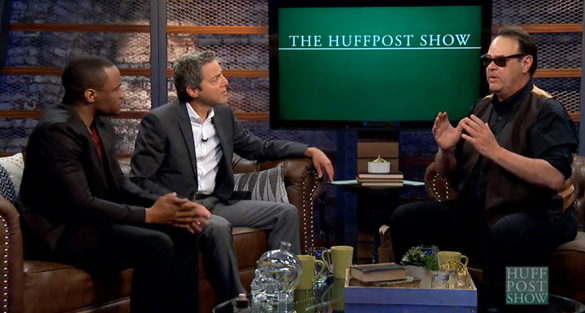 Last Friday, Dan Aykroyd appeared on the third episode of The Huffington Post’s new The HuffPost Show, and among other topics, shared his views on the U.S. Air Force’s UFO cover-up and some details about his own UFO sightings.

The HuffPost Show is hosted by founding editor of The Huffington Post Roy Sekoff and former professor and veteran HuffPost Live host  Marc Lamont Hill. The show is a new weekly news magazine style show, and the third episode, featuring a long interview with Aykroyd (the interview can be seen here), was aired online on Friday.

The conversation turned to UFOs when Hill asked, “I said if I am ever going to meet Dan Aykroyd I am going to ask him about this. You believe in UFOs. Is that right?”

There was a slight hesitation by Aykroyd, and a few giggles from off camera, but Aykroyd headed straight into his answer.

Aykroyd told Hill, “I do. I have seen four, and I can’t say that they are alien craft and neither can the Air Force. The Air Force has been very interested in this. They don’t deny the existence of these hyperdynamic, super aerodynamic craft. They don’t deny.”

Although Aykroyd says the Air Force does not deny the existence of alien spacecraft, he explains why he thinks there is a cover-up of that information.

Aykroyd continued, “Their anguish comes in that they can’t tell you. They want to tell you anything but that they are extraterrestrial. Any excuse at all, even if they are unknown or unsolved. The Air Force cannot just come out and admit that there are extraterrestrial beings far in advanced of our culture that have built these machines.” 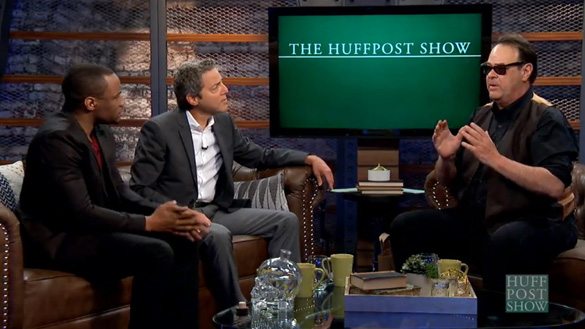 Aykroyd also says he thinks that although there is a cover-up, the Air Force really doesn’t know much more than the rest of us. He says, “They are very interested in what is going on, but like us, they don’t know.”

Hill then asked Aykroyd if he was willing to share more information about the UFOs he had seen.

“Two specifically were definitely aerial constructs of some kind,” Aykroyd explained. “One of them with a light, and one of them dull gray, and they were structures – one of them going very slow, one of them hovering over me.”

As for the other two, Aykroyd continued, “Then there were the two that my wife and friends and I saw – a high altitude sighting many years ago in Martha’s vineyard. Two flying side by side. They were at about 100,000 feet up, and they were going fast.”

Aykroyd then went on to share the account of one of his drivers. He says the driver used to be a cook at the Air Force’s Strategic Air Command. The driver says one day a bunch of guys were gathered around a radar screen watching an object that was traveling at 70,000 miles per hour and performing “whip turns.”

“I believe that there are probably many species coming and going and that the Air Force is very interested, but they can’t come out and say,” says Aykroyd. “Because then you’re going to go, ‘well wait a minute, the parish priest, the cop on the street, the President — you don’t got the power. They’ve got the power!'”

If that were to happen, Aykroyd says there may be a “complete breakdown of society.”

Aykroyd also recommended a book about UFOs and the CIA and FBI by Dr. Bruce Maccabee. The book is titled, The FBI-CIA-UFO Connection: The Hidden UFO Activities of USA Intelligence Agencies, and it reviews documents that Maccabee received via the Freedom of Information Act. Maccabee, a physicist, spent thirty-six years at the Naval Surface Warfare Center.

Maccabee’s book came out in September, 2014, and on March 27, 2015, Aykroyd posted about the book on his Facebook account. He wrote:

March 27…Ex-Naval Surface Warfare employee and physicist Dr. Bruce Maccabee has assembled the most extensively and meticulously researched body of documentary evidence ever compiled on the U.S. government’s genuine interest in the UFO phenomena. The USAF has NEVER denied the existence of these super-performance aerodynamic vehicles. The Air Force’s continued anguish over PUBLIC disclosure is not due to the military’s genuinely admitted reality of these machines’ existence but due to the government’s struggle to categorize the phenomena as being ANYTHING but extra planetary in origin 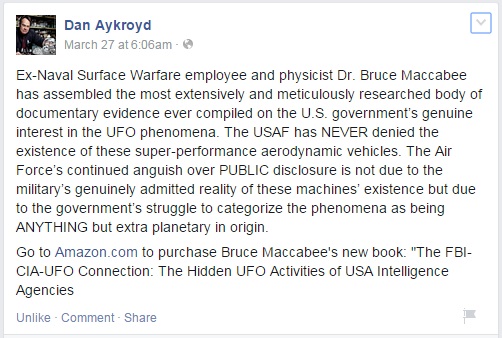 Maccabee, of course, was very happy with Aykroyd’s plug on Facebook and on The HuffPost Show. On Monday, Maccabee posted on his Facebook: “Thanks to the endorsement by Aykroyd, the publicizing efforts of my wife, Jan, and AOL’s mention of Aykroyd’s sightings, the FBI-CIA-UFO book is, at 9 – 10 PM Monday, the #1 best selling UFO book in several of Amazon’s categories.”

At the end of the interview Aykroyd pointed out that 50% of the public believes in UFOs, and that he believes because he “witnessed four really unexplained craft.”

There was some applause off camera, and Sekoff pointed out a guy who appeared to agree with Aykroyd. Aykroyd replied, “maybe he saw something. Maybe.”

Aykroyd can be seen talking about his UFO beliefs for two hours straight on a video titled Dan Aykroyd Unplugged on UFOs. OpenMinds.tv was also able to catch up with Aykroyd a few years in Scottsdale, Arizona at a BevMo liquor store where he was promoting his Crystal Head Vodka. A topic that was also discussed on The HuffPost Show. A bottle of his vodka can be seen on the coffee table on the set.