A New Jersey witness at Hamilton reported watching and videotaping a cylinder-shaped UFO that appeared to move in a controlled manner, according to testimony in Case 58173 from the Mutual UFO Network (MUFON) witness reporting database. 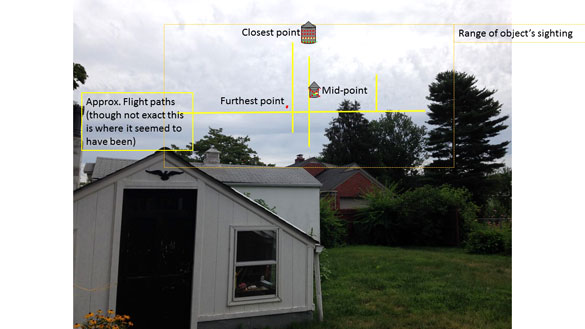 The reporting witness and her husband were in their backyard at 10:39 p.m. on July 18, 2014, when bright red lights were first seen moving right-to-left about a mile away in the sky just above the trees.

“Mostly red with a yellow blinking – irregular beat,” the witness stated.“It then moved closer and I realized I was seeing something weird. I told my husband to turn around because I was looking at something very odd. It was hovering at that point, then moved towards us (closest it got to us – maybe 0.25 miles away).”

They watched the object for about 30 seconds and the husband began filming it using his cell phone (video seen above).

“Unfortunately the night-time contrast on the phone filming stinks, so there is no differentiation of treeline and sky, and lights are blurred together.”

But the witness was able to see the object very clearly with the naked eye.

“At this time I could make out the object pretty well: cylinder-shaped with a triangle top, lights were now separated into four horizontal and parallel rows of bright dots/bulbs. All were a bright red, with the bottom two rows adding green and yellow irregularly.”

The object also emitted a sound for a short period of time.

“We were very quiet and I swore I could hear it. It sounded like a quiet wind machine, maybe a slight buzzing. Not as loud as a helicopter. This lasted approx. 10-15 seconds. Then it moved back so quickly, but smoothly, approximately one mile back, began hovering again and the lighting changed to a red X with a greenish irregular blinking light in the middle. Occasionally more red lights in a thin line lit up on the right side of the X. I could not hear it anymore. This lasted approximately 10 seconds.”

The object then moved further away and the witnesses were now only able to make out that it was a red light with a greenish light irregularly blinking.”

The witness described the movement they were observing.

“It moved right to left twice (maybe five+ miles), up and down once, hovering short times in between (all quickly, but so smooth). It was clear it was much further away at this point and as it was still moving right and down as it went behind the tree line.”

They discussed the possibilities of what the object could be – and then five minutes later – the object returned.

“It was further away, so we could not define shape and lighting lines, only color and movement. It flew in a similar way as before, right to left and then up and down – quickly and smoothly. Then it was gone behind the trees less than a minute later.” 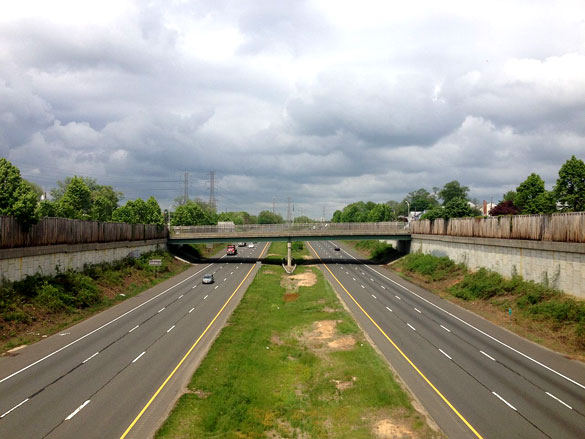 The case was investigated by New Jersey STAR Team Investigator Robert Spearing and closed as an Unknown.

“After reviewing the witness summary and conducting the database checks, it is determined that the witness observed an Unknown UAV,” Spearing wrote in his report.“Witnesses got an extremely good view of object. I called Trenton-Mercer Airport and two persons on the phone with me said that they had never heard of such an object and that it did not originate from the airport.

“Because the object was, at its closest approach, only a quarter mile away or about 1,320 feet and because it was twice as high as a 50-foot pine tree (100 feet) and because it appeared large enough to hold several occupants, I was able to arrive at a size for the vehicle’s diameter. One degree of the sky is the equivalent a thumb held at arm’s length. The object, according to the witness, was 1.5 times the size of her thumb at 1,320 feet away. Using the tangent of 1.5 degrees is 34.5 feet. This is the diameter of the craft. The height of the craft was roughly the same minus the conical top. So the craft was 34.5 by 34.5 feet. To get the floor space of the cylinder to determine the amount of room occupants had to occupy the barrel-shaped object we take the diameter of 34.5 feet and half it to get the radius of 17.25 feet. We square that to get 297 feet. Then we times that by pi (3.14) which gives us 932 square feet. Thus we can safely assume this is not a drone but an aircraft of good size capable of carrying multiple occupants.

“Additionally, the object displayed lighting of geometric configurations including Xs and rows of lines. The lights were multi-colored with an emphasis on the color red.  This implies some sort of communication possibly to another object or for human consumption. 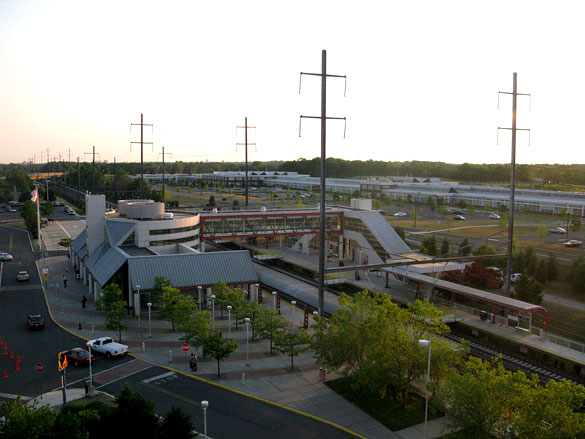 “Conclusion is that the object did not emanate from a nearby airport, object does not conform to any known flying object man-made, object was under intelligent control and displayed maneuvering and advanced symbolic language. Object is classified as an Unknown UAV.”

The witness video is available to view on this page. The witness also submitted a second video clip which can be downloaded here.