Home / Articles / UFO News / Could a baby skeleton discovered in Peru be evidence of aliens?
An odd skeleton, discovered in 2011, was recently made available for extensive study.

Could a baby skeleton discovered in Peru be evidence of aliens? 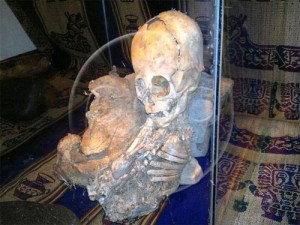 Skeletal remains discovered in Peru in late 2011 garnered attention when supposedly “noted,” yet unnamed, scientists from Spain and Russia reached the incredible conclusion that the skeleton was that of an “extraterrestrial being.” But as Gather reporter Tom Rose reports, this skeleton was recently “made available for serious and extensive study to international scientists for the first time.”

The supposed alien remains were discovered by Peruvian anthropologist Renato Davila Riquelme, who is affiliated with the Privado Ritos Andinos museum in Cusco, Peru. But it is American scientist Brian Foerster, assistant director of the Paracas History Museum near Lima, Peru, who is reportedly behind the studies.

The skeleton is thought to be that of an infant, with eleven ribs, rather than the normal human number of twelve. In addition to its unusually elongated skull, the skeleton has an “inordinately thickened neck and spinal column.” Although elongating skulls was common in some ancient cultures, Rose points out that “no baby skeleton has ever been found which shows this kind of development at such an early age.”

Foerster is coordinating further studies, and top scientists from around the world are reportedly going to “converge in Paracas to study the remains, test the DNA and publish their findings later this year.”