Home / Articles / Costa Rica UFO Dossier – Pt 2
"I saw many multi-colored lights and was able to observe through the windshield a gigantic disc, from which came all the lights; with great astonishment, I realized that it was an unidentified flying object which stopped over us for several seconds and then continued west, searching the side of Alajuelita.”

This is the second part of the article published in the August 1996 issue of the Japanese newsstand magazine Borderland, with some minor adjustments and additional pictures:

The San José metropolitan area was hit by a powerful UFO wave in mid-January 1980. Official documents from the Ministry of Public Security, obtained by the Vilchez brothers, acknowledged that engines and radio equipment of police cars malfunctioned during the UFO sightings. This is popularly known in Ufology as “electromagnetic effect” or EME.

A signed report by Sergeant Elias Sibaja to Col. Marino Donato, director of the Costa Rican Radio Patrol Unit, described the incident [see document]. Sgt. Sibaja was on his patrol shift in the suburban city of Desamparados at 1:35 a.m. on January 17, 1980 when, he wrote in his report, “the car engine stopped and the lights went off; suddenly I saw many multi-colored lights and was able to observe through the windshield a gigantic disc, from which came all the lights; with great astonishment, I realized that it was an unidentified flying object which stopped over us for several seconds and then continued west, searching the side of Alajuelita.” 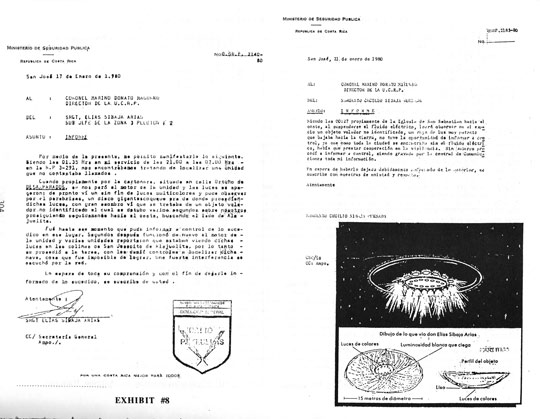 Two official reports from Police Sgt. Elias Sibaja to his superior, Col. Marino Donato, regarding the Jan. 1980 UFO sightings, plus Sibaja’s original sketches and reconstruction of the UFO which stopped his police car on Jan. 17, 1980. (image credit: Huneeus Collection) Click image to enlarge.

Only after the UFO reached a certain distance from the car did the radio function and Sgt. Sibaja was able to communicate with other units. “Seconds later the engine worked again and several police vehicles reported they were seeing those lights on the hills of San Jesucito de Alajuelita,” continued Sibaja’s report, “so the task of locating such craft was undertaken by all the vehicles, but it was impossible to achieve. A strong interference was heard on the [radio] network.”

The 1980 UFO wave was just starting. At 2:30 a.m. on January 19, police Captain Daniel Arias saw an object in the sky 300 meters above the ground, with intermittent green, yellow and blue lights. The whole country was affected by a power blackout shortly after midnight on January 21. Another memo by a police Sergeant reported that during the blackout, “I observed an unidentified flying object in space, a very powerful beam of light descending towards the ground.”

Yet another police officer from Belén informed his precinct had received that night a report from a “Mr. Rodriguez, who saw the descent of a luminous object with flashing white and red colored beams; the light was so strong that it didn’t leave a shadow and illuminated everything totally. The object had a crackling noise, making noise as it emitted these beams; it was like turning on a TV set without the image and noise on the screen, but it was a strong noise. Mr. Rodriguez was coming from Puntarenas and his truck lights went off about 100 meters from his house.” Other witnesses saw the phenomenon too, and the police officer added that experts from “the power plants in Belén were unable to explain the blackout since everything was working perfectly.” 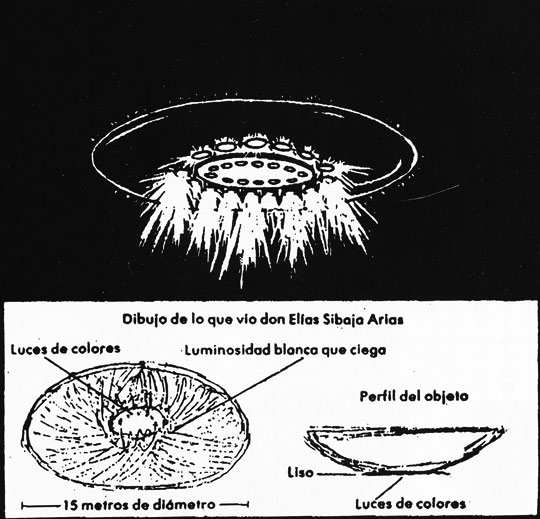 Sibaja’s original sketches and reconstruction of the UFO which stopped his police car on Jan. 17, 1980. (image credit: Huneeus Collection)

A similar incident occurred during another power blackout on April 1, 1992. According to Carlos Vilchez, who investigated the case, “from 35 to 40 police cars described something they were observing from different points of view; there was a blackout and there was also one stalled police car when the object flew above it.” Although no official documents were released, several police officers described to the media a large, multi-colored domed disc seen in the sky during the blackout. The Costa Rican Electrical Institute (ICE) officially denied the UFO was responsible for the power failure.

One of Central America’s best Radar-Visual pilot cases occurred on the morning of July 26, 1995. Everardo Carmona was flying on a single-engine Grumman American when a UFO passed just underneath his aircraft. The near collision was seen by two air traffic controllers, Gerardo Jiménez and Javier Mayorga, from the Tobías Bolaños airport in Pavas, who said the object was “the size of a soccer stadium.” Radar at Santamaría International Airport in San José detected an unidentified object at the same time.

Carlos Vilchez, who interviewed pilot Carmona and the traffic controllers, summed up the case: “Exceptional and qualified witnesses from three different geographical points observed something the size of a stadium. First, the Santamaría Control Tower detected a radar trace that wasn’t a known flight, so they called immediately the Pavas Tower to inquire for additional flights; Pavas responded they had none. As this airport has no radar, they were asked to look out with binoculars. At that instant, two controllers see the object with binoculars as a very large egg, like a golden ostrich egg. They radio the pilot thinking the two craft are about to collide. The pilot responds, it just passed me underneath.” 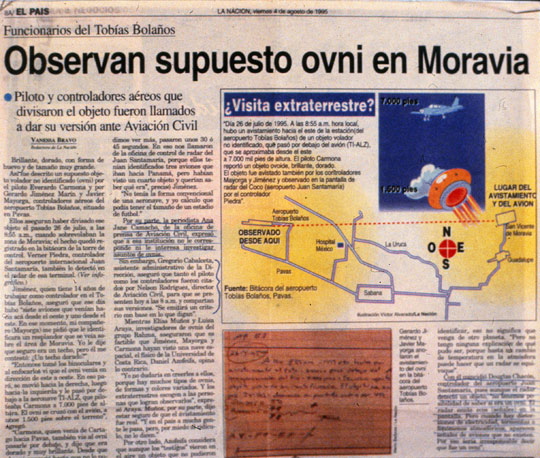 August 4, 1995 article from the newspaper La Nación about the Radar-Visual UFO case, titled: “Supposed UFO observed in Moravia – Pilot and air controllers who saw the object were called to give their version to Civil Aviation.” (image credit: Huneeus Collection)

According to a comprehensive article on the case published by the newspaper La Nación on August 4, 1995 (see clip), the deputy director of Costa Rica’s Civil Aviation agency, Gregorio Cabalceta, stated that the director of the agency, Nelson Rodríguez, was convening a briefing with all the witnesses about the case. “A criteria will be determined based on what they say,” stated Cabalceta to La Nación. 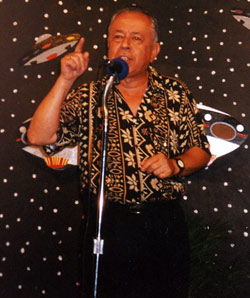 Enrique Castillo Rincón lecturing at the UFO Conference in San José in 1996.

Costa Rican engineer Enrique Castillo Rincón is one of the most interesting contactees I have met. He claims an experience of direct contact with advanced ETs from the Pleiades on a remote lake in Colombia on November 3, 1973. Castillo’s case was investigated two years prior to that of famous Swiss contactee Billy Meier, who also claimed contact with Pleiadians. Unlike Meier, Castillo never produced UFO pictures to support his case; neither did he found a cult or messianic group around the ET message, like so many contactees. Instead, he became a UFO investigator capable of dissecting his own case. Moreover, two and half years after 1973, Castillo stated that all contact with the ETs—including telepathic messages and strange phone calls—had stopped. He lives now in Venezuela with his new wife Ana.

We visited with Castillo the site near the top of Irazú Volcano, where he had his first UFO encounter in 1963. Castillo worked then as an engineer with the Costa Rican Electrical Company and was at the volcano with his boss and another engineer. Suddenly, around 6 p.m., they noticed what they first thought was an airplane, which was then joined by two other objects flying very close to the mountains. As one came near them, they saw it was disc-shaped with a dome; it descended in a falling leaf-like motion to few meters above the ground. “Suddenly there was like a tremendous high frequency sound which almost blew my ears,” said Castillo, “but I was unable to move… I noticed that I was paralyzed.” That was the first time he even heard the word flying saucer, but his ufological odyssey was just beginning. 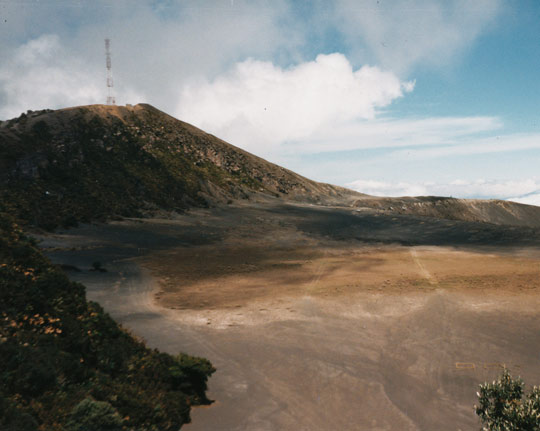 The location on the Irazú Volcano where Enrique Castillo Rincón had his first UFO experience in 1963. 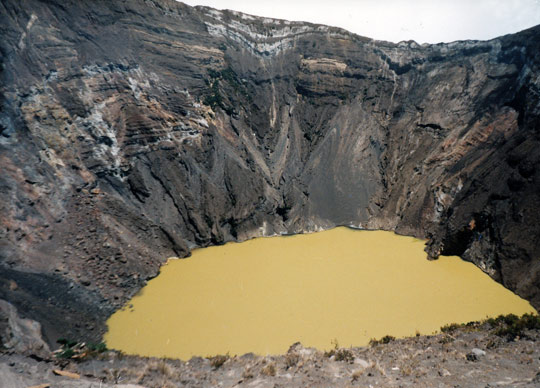 The crater of Irazú Volcano outside San José.