Just months ago, Dr. Dirk Schulze-Makuch of Washington State University co-authored an article that proposed sending astronauts on a one-way trip to Mars with the goal of establishing a colony on the red planet. According to the Daily Evergreen however, his latest book looks “way past Mars, deep into the reaches of space.” 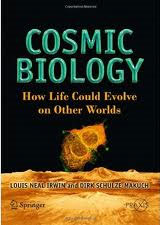 Co-written with professor Louis Neal Irwin of the University of Texas at El Paso, Cosmic Biology: How Life Could Evolve on Other Worlds explores the possibility of extraterrestrial life in the universe. The book discusses the possibility of life existing in unconventional environments like the “atmospheres of Venus and the gas giant planets”—a refreshing and more open-minded view than some scientists who only look for life on Earth-like planets. The authors walk the reader through possible planetary habitats in our solar system, and even discuss possible life forms, basing their theories upon current knowledge of chemistry, energy, and evolutionary tendencies. And while the book is largely based on science, it is written so that even a science novice can comprehend the points presented by the authors.

The authors take an interesting approach in a portion of the book, where they consider “life on our home planet of Earth, not as we know it to be, but as an intelligent observer on another world would deduce it.” The approach of imagining things from the perspective of an extraterrestrial being was also used recently by Stephen Hawking, when he used human behavior to imagine how extraterrestrials might behave.