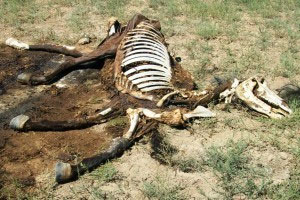 UFO and paranormal field investigator Chuck Zukowski, who specializes in cattle mutilation investigation, recently investigated a case involving the mutilation of two horses on a ranch in Rush, Colorado. The horses were found by their owners on August 11th, 2010 in the back pasture of the ranch.

The mutilated animals were 260 feet apart, but in the same directional position. An eye was missing from each horse, and their tongues appeared to have been surgically removed. There was an incision in the middle of the female horse’s breast area, and the penis was removed from the male horse. According to the ranchers, the cuts on the body of the male horse appeared to have been made by a laser, accompanied by burn marks and a “burn type smell.” 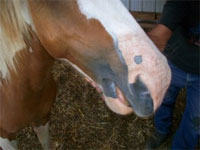 The surviving horse has displayed a dramatic behavior change since the incident, and has become extremely skittish. This horse is also displaying physical changes, including a circular mark on his nose, a circular mark above his left shoulder, and small lacerations.

The ranchers’ dog also showed a change in behavior after the incident, and he too has small lacerations.

With so many unanswered questions, Zukowski and his team will continue to investigate this ongoing case.

For more details about this case, watch the video below, or go to UFOnut.com.