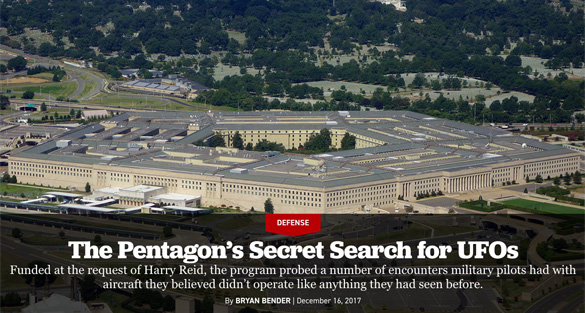 Open Minds UFO Radio: Bryan Bender is the defense editor for POLITICO Pro and can be seen adding commentary on the History Channel’s Unidentified: Inside America’s UFO Investigation. He was previously a D.C.-based reporter for the Boston Globe and Jane’s Defence Weekly, where he covered US military operations in the Middle East, Asia, Latin America, and the Balkans. Bryan also writes about terrorism, the international arms trade, and government secrecy. He is the author of “You Are Not Forgotten,“ the story of an Iraq War veteran’s search for a missing World War II fighter pilot in the South Pacific. He is currently a board member of the Military Reporters and Editors Association.

Regarding UFOs, Bender has broken several important stories. He published an article revealing the Pentagon’s secretive UFO program, the Advanced Aerospace Threat Identification Program (AATIP), the same day as the New York Times. For that story, the Department of Defense (DoD) confirmed to him AATIP did exist and that a career intelligence officer, Luis Elizondo, ran it. Bender also broke the news regrind the Navy creating new UFO reporting guidelines and another story revealing that US Senators were briefed on UFOs.

In this interview, we discuss how Bender came to know AATIP existed, how he vetted that information, and his thoughts on the nature of government UFO research and where it may this all might lead to.

Read more about Bryan and read his articles at Politico.com.