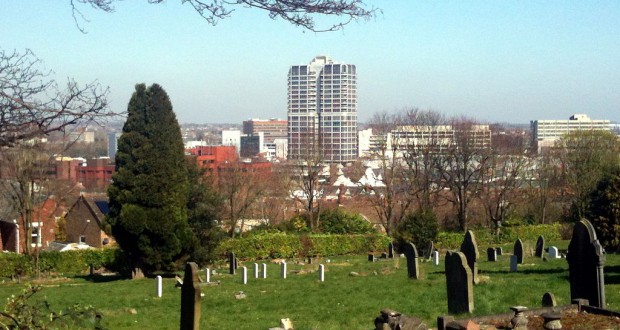 The witness was at Drove Road near the Magic Roundabout Intersection with very good visibility about 8 p.m. on October 3, 2014, when the object was first seen. Pictured: Swindon town centre from Radnor Street Cemetery. (Credit: Wikimedia Commons)

A British witness at Swindon, Wiltshire, reported a hovering, triangle-shaped UFO less than 70 feet off of the ground, according to testimony in Case 64480 from the Mutual UFO Network (MUFON) witness reporting database.

The witness was at Drove Road near the Magic Roundabout Intersection with very good visibility and ambient light just after dusk with streetlights in the area about 8 p.m. on October 3, 2014, when the incident occurred.

“A triangular craft was seen floating above the quiet residential area immediately to the east of Drove Road, Swindon, for a short period of time before moving away in a manner inconsistent with a sighting of any conventional craft,” the witness stated.

The witness said the object was hovering. 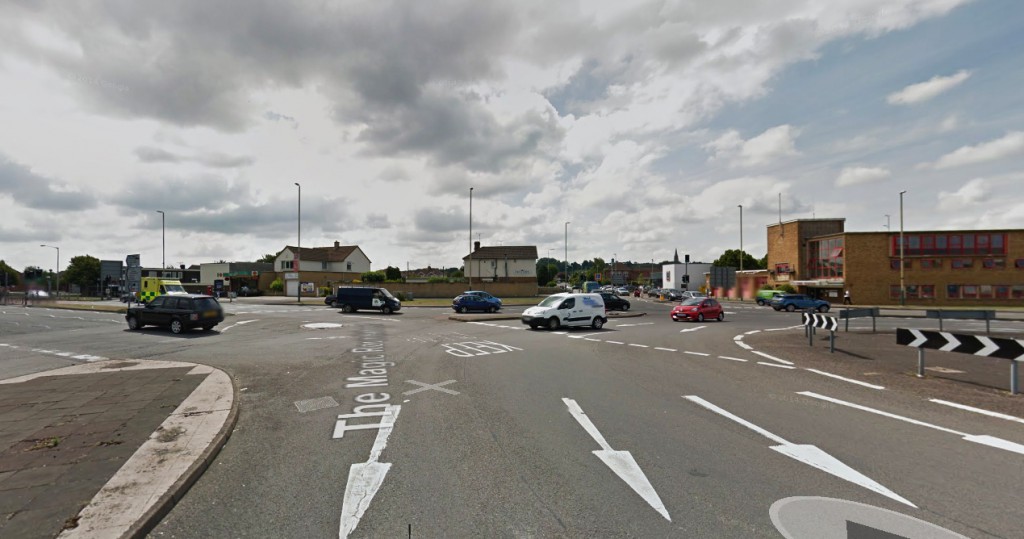 The object was triangle-shaped and the area immediately underneath the craft was very brightly illuminated by the powerful lights. Pictured: Magic Roundabout Intersection near Drove Road. (Credit: Google)

“The craft was seen to be floating perfectly still and in complete silence very close to Drove Road at a low altitude above houses. It is difficult to estimate the altitude of the craft but it was perhaps 50-70 feet from the ground, and certainly what would legally constitute ‘low flying.’”

According to the MUFON report, the craft was very close to the observer and so it could be seen with great clarity. It was very conspicuous and easy to observe. The witness felt that it was clearly not any form of conventional aircraft or any other known object.

The witness described the shape of the object.

“The platform of the craft was a perfect triangle in shape and was larger in area than any one of the houses over which it loitered, although it did not appear as large in area as two such houses. At each of the vertices of the visible underside were very large, powerful circular lights (one at each vertex).”

The witness described the object’s light and other observations.

“The character of the light was very similar to that of the surrounding street lights, i.e., a bright flame yellow hue. There was a subtle difference of color between the light and that of the street lights. Namely, it was of a slightly more brilliant character – less burnt and slightly more saturated. The craft itself was of a dark or black color and with no noticeable surface features. It was not possible to make out the texture of the surface. There were no signs of landing gear or wheels or indeed any other protrusions. The triangle was perhaps a bit broader in the axis of motion. At the center of the underside, seemingly fixed directly to the bottom of the craft, was a pulsing red light far smaller than the others. This appeared to be very similar in character and frequency if not identical to a standard red anti-collision beacon of the sort used commonly in aviation.”

The craft was hovering during this observation by the witness.

“The craft loitered perfectly still without any movement or instability and in complete silence over a quiet residential area for an observed period of approximately 3-4 minutes, although it was already situated when first sighted and so may have been there for a while. It could not have been present for more than 15-20 minutes as the area was traversed in the opposite direction using the same route approximately this length of time prior to the start of the observation window.”

The witness felt that if anyone had been close to the craft that they would have seen it due to the lights.

“It was obvious during the observation that the area immediately underneath the craft must have been very brightly illuminated by the powerful lights. Anyone beneath the craft would have been dazzled/blinded. The platform seemed to be entirely parallel to the ground while it was stationary.”

Finally the craft began to move.

“After about 3-4 minutes, it moved off without any noticeable acceleration. It moved very slowly – perhaps no more than 15 mph based on comparisons with moving traffic on Drove Road. Interestingly, it moved with one of the vertices leading, as though that were the nose of the craft. No fins or signs of a tail could be seen. It remained horizontal as it moved away and no instabilities/roll/etc. were visible.” 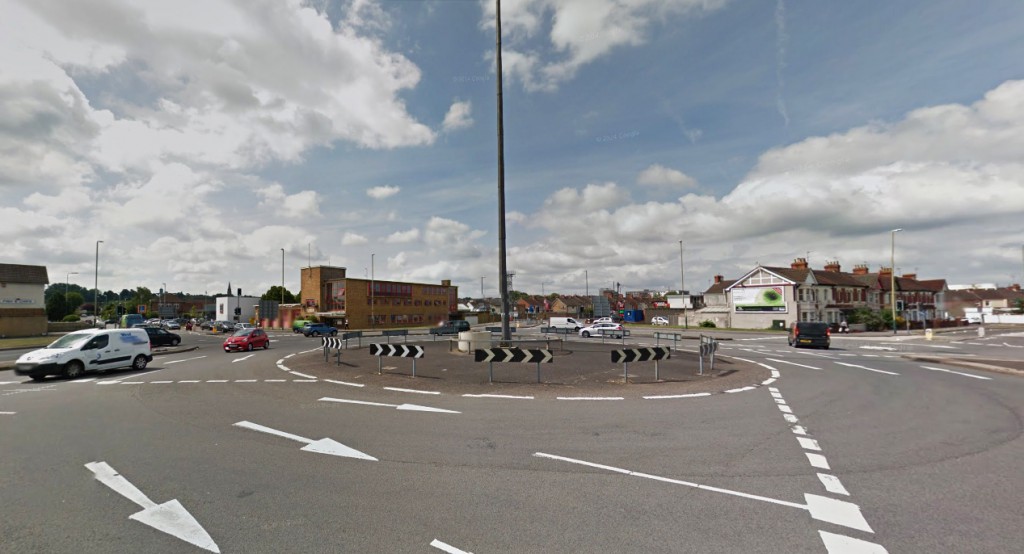 The craft then switched off lights.

“Almost immediately after beginning to move, the large lights were all switched off. The lights continued to glow and hence remained visible for the duration of the 30-40 seconds it took for the craft to attain diminished visibility to the observer. The afterglow was very distinctive and allowed the craft to remain visible for much longer than would otherwise have been the case. Perhaps a qualified lighting expert might be able to identify the type of light involved: the glow was a burnt dim, orange-yellow hue and faded very slowly. This also gave the impression that the lights were more powerful than had originally been thought. Slight concentric grooves were apparent within the lights as with powerful search lights and floodlights perhaps.”

The craft moved away.

“The craft was moving in a straight line of constant altitude towards the portion of Queen’s Drive near to the Magic Roundabout. However, before reaching that position the craft banked to the right at a very steep angle (nearly vertical) giving an excellent view of the craft from below, something that would not be seen in conventional aviation.”