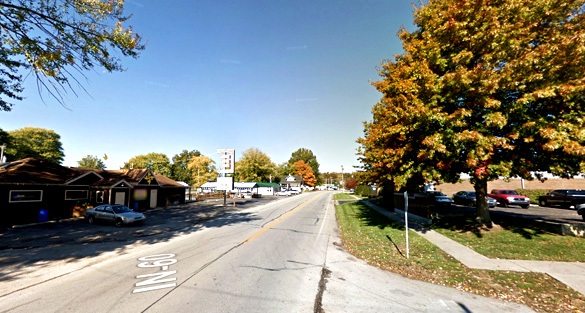 An Indiana witness at New Pekin reported watching “a large ship” over his country property that emitted bright lights, according to testimony in Case 75938 from the Mutual UFO Network (MUFON) witness reporting database.

“Out of nowhere an appearance of a large craft appeared at the south of my woods,” the witness stated,“and I only observed the back of the craft. It initiated lights on very bright on the back of the craft and initiated forward lights on both sides, but they did not light up the ground or woods below, just brightness on the craft and then from right to left red light back and forth.” 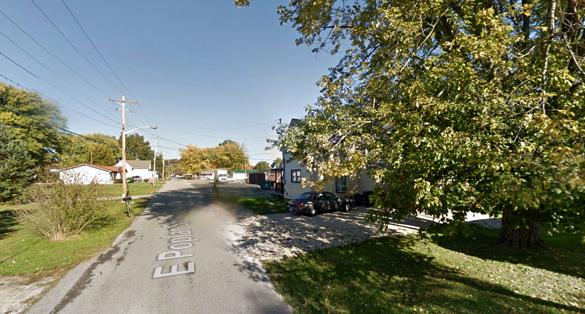 “The lights were white with a tinge of yellow. The craft was heading south toward the knobs, and then blipped out and was gone. I want to point out that the lights were very bright and it made it hard to adjust my vision to see the rest of the craft. The length of the rear end of the craft of what I could see was in the measurement of 90 to 100 feet across.”

“The object was described as 90 to 100 feet across the rear of the craft, lights were white/yellow/red, no sound, no emission,” Leech wrote in his report. “Light coming from object was extremely bright, making it hard for the witness to observe the shape and exact size of the craft.”

Leech asked the witness to use other cases for lighting comparison. 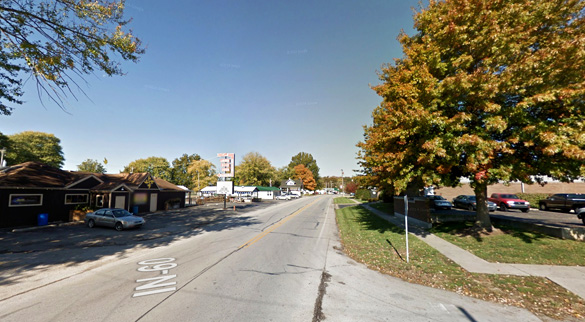 The lights on the craft were very bright and it was hard to see the exact size and shape. Pictured: New Pekin, Indiana. (Credit: Google)

“My observation last night was the lights were stationary on the craft, but similar in brightness, on the sides, but the lights on the back were somewhat brighter, which for them worked out that an individual on the ground observing, the brightness would block their vision and that was done,” the witness stated.

Leech wrote that the witness stated that the object was there one minute and gone the next, best described as if the craft went through another dimension quickly.

“This area has had numerous different type of events, with the witness stating it was somewhat of a ‘UFOhotspot.’ The following day the witness made contact with a couple of neighbors and asked if they had observed anything. Both stated that they had retired for the evening and didn’t see or hear anything. The witness did return to the event area to get a better measurement of the size of the rear of the craft, stating it was between 80-100 feet across the rear of the craft. The object was 500 feet to one mile away from the witness.” 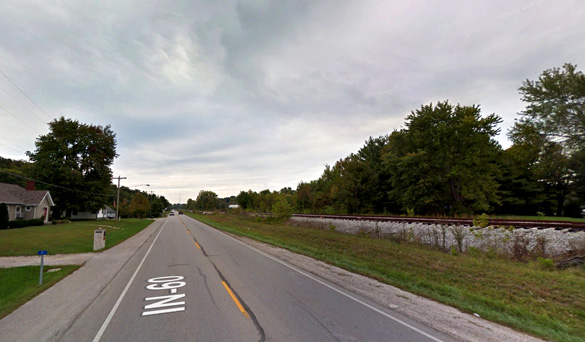 The witness believes the area might be a hotbed of UFO activity. Pictured: New Pekin, Indiana. (Credit: Google)

Leech closed out the case.

“Witness is credible. Description of the object with the light pattern described by the witness does not conform with any known commercial or publicly known military aircraft. This object appeared, with no sound, no emission, hovering, andthen disappearing quickly as if it jumped into a different time. Object was only visible to the witness for approximately 40 seconds. The object was under one mile away from the witness which would have let the witness identify a known aircraft or natural occurrence.”

Leech references MUFON Case 74282 with witness testimony where the lighting configuration and description of brightness is similar.

New Pekin is a town in Pierce and Polk townships, Washington County, Indiana, population 1,401. Please remember that most UFO sightings can be explained as something natural or man-made. The above quotes were edited for clarity. Please report UFO activity to MUFON.com.