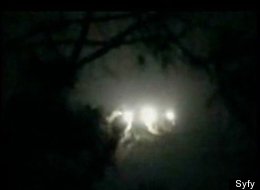 Recently a video of strange lights captured near Pensacola, Florida turned into a very productive investigation for one group. During an interview on the web series Spacing Out!, former FBI agent Ben Hansen, who is the lead investigator on the SyFy television series Fact or Faked, revealed that his team captured their own video of an unidentified object in the same location.

While the team was able to reproduce similar effects during tests involving flares, an air boat and ATVs, what happened next led them to leave the case open. During a night investigation using a full spectrum camera, the team captured a bright white light which curved around the tree line and shot off with incredible speed. The motion detector on the camera, which places a white box around moving objects, not only captured the object, but also it’s reflection over the water ruling out the possibility of a bug in front of the lens. The team has stated that this is some of the most incredible footage they have captured to date.

With this stunning footage left unidentified, Hansen hopes to return to the location in the future to conduct further tests. Watch the interview with Ben Hansen and view the UFO footage below:

You can find out more about Ben Hansen by following him on twitter @BenHansen00 or visiting his website: BenHansen.com