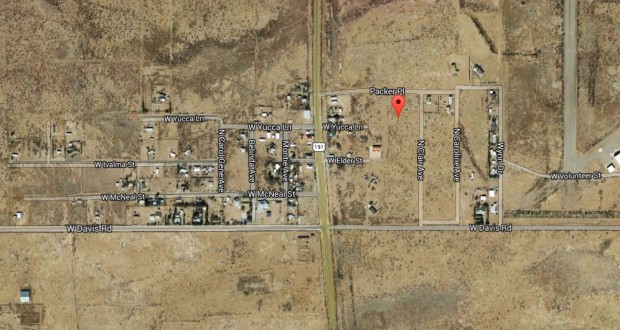 The boomerang-shaped UFO appeared to be escorted by two military jets as it moved over McNeal, Arizona, about 9:08 p.m. on September 9, 2014. (Credit: Google)

An Arizona witness at McNeal reported watching a boomerang-shaped UFO that appeared to be escorted by two military jets about 9:08 p.m. on September 9, 2014, according to testimony in Case 59707 from the Mutual UFO Network (MUFON) witness reporting database.

The reporting witness and his mother were in their barn feeding horses when a rumbling sound was heard overhead.

“I’ve heard that a hundred times,” the witness stated. “There was a full moon rising in the east about three or four fingers above the horizon and a very clear night. I looked up to the west to where I heard the plane and saw red lights moving southeast; but it was strange.”

“It had five lights in a boomerang pattern – one on the nose and two more on each side. If it was a plane it was the biggest plane I’ve ever seen. It was really high up too. But I’ve seen airliners around that same height and it was five times bigger than those.”

The witness then noticed two fighter jets in the area.

“There were two jet fighters tailing slightly behind the tips of its wings. I knew they were separate aircraft because they moved independently from the red lights which stayed together and they were not red but more like white/ yellow in color. As the object and jets passed over I could see the jets had blinking aircraft lights – like you see on all aircraft.”

The witness continued to watch, but only saw the jets again.

“I kept watching for a few more minutes until the lights faded by the glare of the moon to the southeast. I went back to the barn and told my mother what I had seen. A few minutes after that at 9:20 p.m. I saw two jet fighters returning from the same direction going northwest. They were no longer escorting anything and had their afterburners on. They were going much faster than when I had previously seen them.”

McNeal is an unincorporated community in Cochise County, Arizona, population 238. Arizona MUFON is investigating. Arizona has a current UFO Alert Rating of 4 with a higher than average number of recent reports nationally. Arizona had 10 UFO reports in August 2014 – the 19st highest reporting state – while California had 99 reports as the highest reporting state. The above quotes were edited for clarity. Please report UFO activity to MUFON.com.