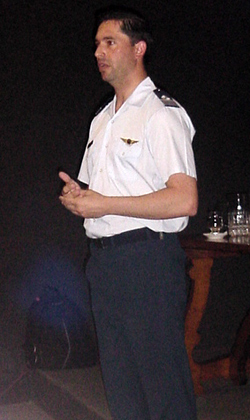 The Argentinean Air Force (AAF) announced yesterday that it was in the process of creating an official commission to investigate UFO reports in the country. Captain Mariano Mohaupt, a press spokesman of the AAF, told the Agence France-Presse (AFP) that “the Commission of Investigation of Aerospace Phenomena is in the process of being formed.” The military officer added the AAF already has some cases experienced by its pilots which have not been explained, but that “now it will deal with this issue in a formal and professional manner that contributes to its own mission of controlling our airspace.”

The Commission will be formed by an inter-disciplinary team composed of meteorologists, air controllers, pilots and radar experts and will receive reports of UFO sightings from the public. “There are many reports that are later clarified as not unconventional phenomena,” Capt. Mohaupt told the AFP. The AFP story spread like wildfire throughout the Latin American press, appearing on all the websites of major newspapers, TV and radio stations.

The Spanish news agency EFE also interviewed Capt. Mohaupt, basically confirming the same story. “The Commission will contribute to the mission of the Air Force, which is precisely to provide security in our airspace and therefore has an interest in knowing any phenomenon that occurs there,” the AAF spokesman told EFE. He also added that this Commission responds to “the interest of the people,” which has been on the rise in Argentina, as well as in the rest of the world, in recent months.

The first sign that the AAF was about to announce the formation of a UFO Commission was revealed a couple of days before Christmas by Tamara Hendel, a young reporter with the Argentinean TV network Telefe, where she directs the segment “MundosParalelos” (Parallel Worlds) within their 8 p.m. news broadcast. On December 22, Tamara interviewed Commodore Guillermo Tealdi, Chief of Communications in the AAF, about the institution’s policy towards UFOs. (The rank of commodore in the AAF is equivalent to a colonel in the U.S. Air Force.) Right after the interview, Tamara told the news anchor that she had a big scoop. Although Tealdi didn’t say it on camera, the reporter was told that the AAF was about to launch an official commission to investigate UFOs. The Telefe interview was immediately posted on YouTube and led to a series of announcements by prominent Argentinean ufologists, including Silvia Pérez Simondini, the director of the Visión Ovni UFO Museum in Victoria, a city in the province of Entre Ríos, Mercedes Casas of OVNI Salta, Raúl Avellaneda, and others.

Here is the Telefe clip of the interview with Cdr. Tealdi:

Here is English translation of  the Tamara Hendel interview with Commodore Tealdi: 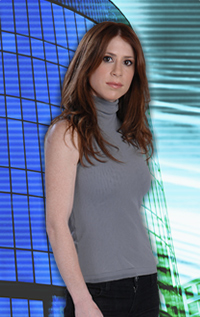 Tealdi: The airspace is the responsibility, is under the control of the air force through the available operative means which are the radars installed in different parts of the country.

Hendel: If there was some type of unidentified craft or a UFO, could you tell?

Tealdi: Radars have the capacity of identifying, according to the surface of a celestial phenomenon or object in space there is a bounce in the radar which is identified as an echo; starting from that which appears as an echo the air force has the responsibility of investigating to see what it is, in other words, what are we talking about with regards to that echo.

Hendel: Could we say that they are UFOs?

Tealdi: The air force does not speculate with regards to the existence of manned or craft sent here, that is something that people deal with in a personal way, what the air force does is to try to identify what we are talking about in terms of the security of the air traffic which is our responsibility.

Hendel:  What amount of registered echoes are archived?

Tealdi:  There are really very few, there about two or three cases but there was not enough time or motive to intercept them [scramble fighters] because they were very brief situations in terms of time.

Hendel: And until now you have not been able to identify an extraterrestrial existence?

Following this brief exchange, the reporter told the anchorman about the impending announcement of the creation of an official commission “to investigate celestial phenomena.” Capt. Mohaupt’s announcement a few days later officially confirmed her scoop.

A LITTLE HISTORY AND BACKGROUND

The announcement of the creation of a Commission of Investigation of Aerospace Phenomena in reality reopens an official military UFO inquiry that was active in Argentina for several decades, although not for the last fifteen years or so. I discussed the history of these efforts undertaken by the Argentinean Navy, Air Force and a quasi-official group called CEFE (Spanish acronym for Commission for the Study of Space Phenomena) in previous articles in this website—see “Argentina’s X-Files – Pt 1” and “Argentina’s X-Files – Pt 2“. The last official AAF study was the UFO desk under Capt. Augusto Lima at the National Commission on Space Research, which closed down in 1987. CEFORA (Spanish acronym for Commission for the Study of the UFO Phenomenon in the Argentinean Republic), an umbrella organization of several UFO groups and researchers, requested officially President Cristina Fernández de Kirchner last May for the release of all official UFO documents. The government acknowledged receipt of the petition but so far has not released any files.

Commodore Tealdi expanded the scope of the new Commission in an interview just published by the newspaper Tiempo Argentino. He explained in an interview with reporter Ramiro Barreiro that the members would be composed of “people who have knowledge” from key agencies like the National Meteorological Service, the National Administration of Civil Aviation, experts in Electronic Warfare, medicine and from the National Institute of Agricultural Technology (INTA) to look into possible landing trace cases. But Tealdi also acknowledged the power of average citizens who lobbied both the air force and the Ministry of Defense, admitting that the commission was created in part because of “the messages sent by people to the institutional [web] page of the agency and by requests from the Ministry of Defense that came from the same source: the people.”

There can be little doubt that the creation of the Air Force Commission is a great step forward. Besides the domestic aspect of citizens requesting that the government do something about the UFO issue, there is no doubt that there was also an international, or rather regional, aspect to this move since most of Argentina’s neighbors already have official government UFO projects and it was beginning to look like Argentina was falling behind in this new frontier of the 21st century. The oldest is CRIDOVNI (Spanish acronym for Commission for the Reception and Investigation of UFO Reports) which belongs to the Uruguayan Air Force, has been functioning since 1979 and is currently headed by Colonel Ariel Sánchez Ríos. In Chile, the Civil Aviation Agency DGAC created in late 1997 the Committee for the Study of Aerial Anomalous Phenomena (CEFAA) directed by Air Force General (Ret.) Ricardo Bermúdez. In Peru, the Air Force launched the OIFAA (Office of Aerial Anomalous Phenomena) a decade ago under the direction of Commander Julio César Chamorro. Brazil doesn’t have a UFO agency per se, but it has acknowledged that UFO cases in its airspace are investigated by the Aeronautical Command. Brazil has also undertaken a systematic release of its official UFO files during the last few years.

So Argentina is really catching up with its neighbors in what is definitely becoming a very interesting trend for South American countries, a trend in which having an official UFO agency is good politics both domestically and regionally. Anybody listening back here in the good ‘ol USA?

Read the latest updates regarding the Argentina UFO Commission: