Home / Articles / Argentinean Air Force UFO Commission states mission
“To document, analyze and study unidentified phenomena in an orderly, systematic and truthful manner by means of conventional control systems on the airspace under the National Jurisdiction.”

Logo of the Commission for the Study of Aerospace Phenomena

Since we broke the story in our website last Friday about the creation of an official UFO Commission of the Argentinean Air Force (AAF), their press office has now posted a communiqué in the official website of the AAF, providing the basic facts and contact information for citizens to submit reports of UFO sightings. The Comisión de Estudio de Fenómenos Aerospaciales (CEFAE, which stands for Commission for the Study of Aerospace Phenomena) also has a logo showing a man looking at a sky phenomenon over an outline of Argentina’s map. The communiqué can be accessed here and this is full translation of the text from Spanish:

Commission for the Study of Aerospace Phenomena

“To document, analyze and study unidentified phenomena in an orderly, systematic and truthful manner by means of conventional control systems on the airspace under the National Jurisdiction.”

Due to the increment of information given by the population regarding sightings of unidentified aerospace phenomena, the Chief of the General Staff of the Argentinean Air Force created the Commission for the Study of Aerospace Phenomena through Resolution Nº 414. Its goal is to contribute in the search for a scientific and technical explanation of those aerospace phenomena which have not been identified.

The commission is composed of full time personnel of the Argentinean Air Force and specialists with a proven record in different fields of research that can contribute an invaluable support to the analysis of each field of study from different perspectives.

It is fundamental for the investigation to count with true information that can describe with the highest precision the observed phenomenon, for which the collaboration of our citizenry is very important.

To that end the Commission can be contacted through the email address fenomenosaerospaciales_sg@faa.mil.ar in which we request to add to your information your personal data so that you can be contacted personally if required by the investigation. 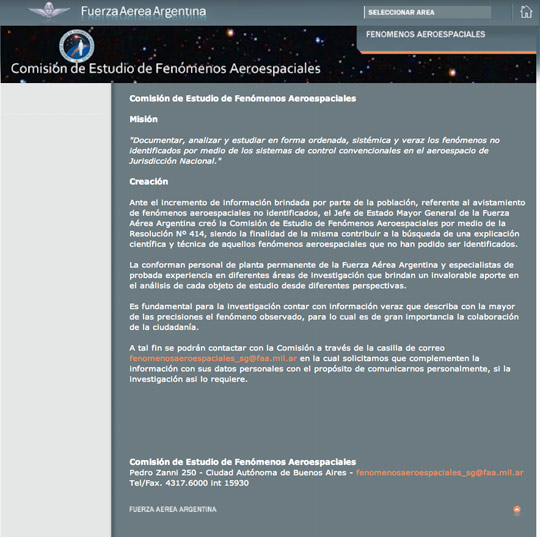 The official communiqué about the UFO commission in the Argentinean Air Force website.

For our American and international readers, please don’t send any sighting reports to that address since CEFAE is charged by law to investigate UFO cases in Argentina only. The military is not responding at this time to requests for interviews from the international media either, as Mexican journalist Yohanan Díaz found out when he tried to interview Capt. Marcelo Mohaupt, who is in charge of the commission. He did interview Andrea Pérez Simondini, one of five external members from Argentina’s UFO community, who is also the person dealing with the media. Andrea stated that the big achievement “consists in the recognition from the Argentinean Air Force of the existence of a phenomenon with anomalous characteristics reported in our country. The goal now is to permit that the tools and scientific knowledge will allow us to deepen the possibility of finding the necessary evidence and prove the existence of a phenomenon of extraterrestrial origin. For that we need to follow a path of responsibility and compromise.” 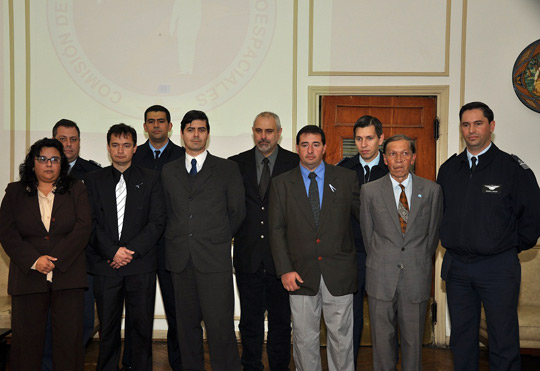 Some of the AAF and external members of the brand new commission. Andrea Pérez Simondini is on the left and Capt. Marcelo Mohaupt on the right. (image credit: El Universal Gráfic)

We contacted Andrea Pérez Simondini as well, whom I met several years ago at a UFO Symposium in Viña del Mar, Chile. She gave us some additional background via email about the early stages of the project: “For starters, the commission will investigate cases from qualified witnesses such as pilots, air traffic controllers, specialized aeronautical personnel, etc. They will also receive via their website photos and videos where the witness saw what he captured in the photo or video. For now those are the first steps. On the other hand, every air base will receive a questionnaire so that the personnel from that base can report any experience that they may have.”

Andrea Pérez has also been recently appointed the Director of CEFORA (Spanish acronym for Commission for the Study of the UFO Phenomenon in the Argentinean Republic), an umbrella organization of several UFO groups and researchers created in 2009 to lobby for the declassification of government UFO files. Last year CEFORA submitted a formal request to President Cristina Fernández, but the files have yet to be released. Now that official and civilian ufology have been integrated in Argentina and both camps are working together instead of against each other, there is a much better chance that those old records, going back to the 1960s, will eventually be located and released.

We’ll keep you posted here on any new developments regarding CEFAE and CEFORA.

Argentina has had it’s fair share of UFO news and history. You can read more about the UFO Commission and other Argentina UFO news here.