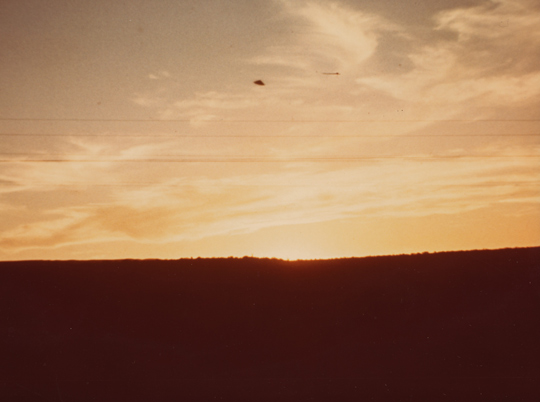 At 19:40 on 23 May 1974, as Sr. Cesar Elorda was driving between Caleta Olivia and Comodoro Rivadavia, a coastal highway paralleling the shoreline of Golfo San Jorge, he noticed a strange aircraft approaching from east to west, across the highway, at not a very great speed. When he first saw it, it was coming from the gulf, from over water and was about 200 meters from land. It continued its course and passed over the highway as he came abreast of it, passing over his car also. He could see clearly now that, it was no airplane like he had ever seen before.

He stopped the car and got out with his camera, and was able to get one photograph before the object was too far away and passed on into the sunset.

The object was a circular lens-shaped craft with an indistinct flat bottom and a dome on the top. It was a dark dull gray and looked metallic. It flew lazily along, making no sound, and leaving no trail. He did not see any lights of any kind. The sun was already below the horizon when he snapped the picture but the sky was still quite bright.

People in that area see UFOs quite regularly, especially around Golfo San Jorge where many think that they go into and come out of the clear waters of the gulf. Some UFO researchers think there may be a submarine UFO base near there.