A video was published to the internet on Monday, May 2nd, allegedly depicting an extraterrestrial who was supposedly recovered following a UFO crash.

A video was published to the internet on Monday, May 2nd, allegedly depicting an extraterrestrial who was supposedly recovered following a UFO crash. At least two sources claim to have received the video from an anonymous source, along with the promise of six more videos still to come.

The website Allnewsweb.com posted the video to their website and YouTube channel, with an accompanying story suggesting that the extraterrestrial in the video could possibly be “a survivor of the Roswell UFO crash that occurred over sixty years ago in New Mexico.” Michael Cohen, the author of this story, further states that the video is “allegedly part of a much larger collection of footage that was filmed by government agents working on top secret UFO and alien matters between the years 1942 and 1969.”

The Alien Disclosure Group also claims to have received the video from an anonymous source, and they too posted it to their YouTube channel and their Facebook page.

But from whom did Cohen receive the details for his story? And who provided the video to these two sources?

After investigating the origins of this video, Grant Cameron of PresidentialUFO.com was able to determine that a woman by the name of Judy Fältskog claims to be the source of the video. She told Cameron that she “paid a lot of money for it and spent [two] weeks in Antarctica to arrange the sale of this video.” The video was posted to YouTube by Fältskog at http://www.youtube.com/watch?v=AGvncwEg7oI (removed by source).

But who is this Judy Fältskog?

Through his investigation, Cameron determined that this Judy Fältskog is the same Judy Fältskog who, in 2010, claimed to be an astronomer working for NASA, and announced that she had intercepted and deciphered an intelligent signal from a nearby star. As Cameron points out, Fältskog’s credentials and claims turned out to be false. And research into Fältskog revealed interesting results including a history of hoaxing, identity changes, and even a sex change.

Members of the AboveTopSecret.com website investigated Fältskog’s history, determining that she had previously been James Van Greunen, a South African UFO enthusiast, who alleged involvement in the recovery of a UFO. After being exposed as a fraud, Van Greunen allegedly left South Africa, moved around the world, and had a sex change operation.

Fältskog told Cameron that “there is a lot more footage of this film to be released, [more than] 180 minutes of it as well as other more interesting footage.” But this person’s dubious background strongly supports the notion that this ET video is nothing more than a hoax. It also raises doubt that Fältskog is indeed the source of the video.

Fältskog and Cohen seem to have only uploaded this one ET video, while the Alien Disclosure Group uploaded a second video on the same day, which allegedly depicts the downing and recovery of a UFO and ETs by the air force. Both videos are similar aesthetically, supposedly making them from the same batch of “leaked” videos.

But to add to the mysterious origin of the video(s), a YouTube user by the name of Ivan0135 uploaded the ET video a day earlier—on May 1st—and the UFO video was uploaded on April 13th. Interestingly, “South Africa” and “Kalahari Desert” are among the string of descriptive keywords attached to the ET video uploaded by Ivan0135. This suggests a connection between Ivan0135 and Judy Fältskog.

The UFO video uploaded by Ivan0135 adds to the confusing origin of these two videos. That video begins by showing a blurry logo with black bars blocking out text above and below the logo. Another video on YouTube that claims to show footage of an alien autopsy in Russia displays the same logo at the beginning, without the black bars. We were informed by Croatian radio host Giuliano Marinkovic that this logo is a KGB logo. So this adds the question: Why would a video alleging to show a U.S. military chase and recovery of a UFO begin with the KGB logo?

Fuzzy logo from the UFO video on the left, clean KGB logo on the right

The mysterious and questionable source of the video isn’t the only red flag indicating a hoax. Several technical elements within the video elicit skepticism. For starters, there are multiple versions of the video floating around the internet. The video posted by the Alien Disclosure Group is completely silent, while the video posted by Allnewsweb.com and by Fältskog has an almost comically loud clicking sound, supposedly from a projector. First of all, film cameras of that era didn’t record sound. Secondly, while it has been suggested that the camera was filming a projector screen, it seems unlikely that an audio recording would have been made and added to the film when the only audible noises are those from the projector.

The AboveTopSecret.com user VParanormal1 analyzed the film’s audio and, based on the clicking sound, determined that the assumed projector was moving at a speed of twelve frames-per-second. He points out that projectors from the period of which the film supposedly originated (1940s) generally operated at speeds of eighteen frames-per-second and faster. This would indicate that either the speed of the videos has been reduced for some reason, that the noise is of something other than a projector, or that the projector noise was added from another source for effect. 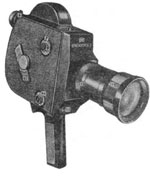 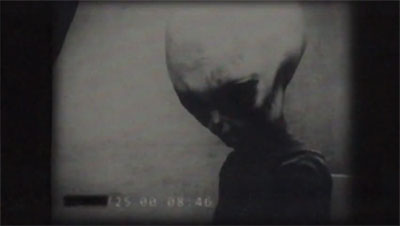 The vertical 'scratch' line over the number 6

The film, overall, is very low quality with seemingly excessive graininess and film damage, suggesting the film was “aged” artificially using video effects software. “Old movie” effects filters are readily available in most video editing programs that easily take a video and make it look like an old movie by adding flickering, grain, and other noise. The time code in the video supports this theory. At several points in the video, the time code seems to have its own independent “old movie” filter applied to it. If you watch closely, at thirty one seconds into the video, the last two digits of the time code are “46.” A vertical line appears briefly over the number “6,” but is isolated to the height of the number, indicating that an “old movie” filter could have been applied to the time code layer independently.

The various versions of this video are another peculiarity. The video posted by the Alien Disclosure Group appears to have been edited by the group to remove the projector sound and to add their own titles, including a “Thanks for watching” message at the end of the video. Additionally, the Alien Disclosure Group’s version of the video has an extra eleven seconds of the alleged ET added to the end of the video. But looking at the time code reveals that this “extra” footage is simply the footage from the beginning of the video, but oddly in reverse for some reason.

On Wednesday, May 4th, the British media company ITN interviewed Nick Pope, who used to investigate UFOs for Britain’s Ministry of Defence, about the video. After watching the video, Pope said the video is one of the best hoaxes he has ever seen. He further stated:

“This video isn’t going to change anyone’s mind. Believers will go on believing. Skeptics will go on thinking it’s a load of nonsense. If anything, a film like this is going to polarize people’s beliefs. Those who believe in UFOs and extraterrestrials will say, ‘This proves my point. I was right all along.’ Skeptics are going to say, ‘It’s such an obvious fake.’”

There are many red flags indicating this video is simply a hoax. The purpose of the hoax is unknown at this point. But with the flood of extraterrestrial-themed Hollywood movies, television shows, and video games, it wouldn’t be surprising to learn that the video is part of a marketing campaign for some upcoming release. With the overly-aged film look, the upcoming J.J. Abrams/Steven Spielberg movie Super 8 might seem a likely candidate. But after reviewing analysis of the Super 8 movie trailer done by others, it appears that the extraterrestrial in Super 8 is some sort of shape-shifting, more animal-like creature than the Roswell “grey” extraterrestrial depicted in the YouTube video.

The creator of the video, and the purpose behind it, may never be identified. But then again, so much about this video was already discovered within twenty-four hours of its release. It is unfortunate that so many people fall so quickly for videos like this without taking the time for close examination. Sadly, hoaxed videos are quite common, and therefore a degree of skepticism is essential when watching any UFO or ET video.

If history is any indication, it is only a matter of time before the mainstream media latches onto this story, running with few details, and performing minimal research.