On February 12, President Obama appeared on The Ellen DeGeneres Show. DeGeneres invited child prodigy Macey Hensley, a 6 year-old girl who has a knack for presidential trivia, to ask the president some questions. Hensley decided to ask the President about aliens, thus requiring Ben Hansen, former host of Syfy’s Fact of Faked: The Paranormal Files, to perform another painstaking analysis of President Obama’s response.

Hansen has previously analyzed UFO comments from President Obama and former President Bill Clinton made on Jimmy Kimmel Live. In each he found what he sees as indications that they take the topic more seriously than they let on, and may even have something to hide.

On The Ellen DeGeneres Show Hanley told the President she wanted to know if aliens were real.

President Obama responded, “We haven’t actually made direct contact with aliens yet.  But when we do I’ll let you know.” 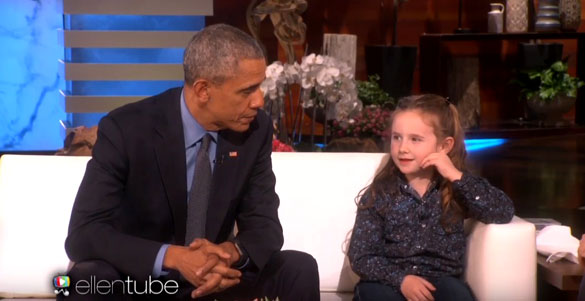 Cute joke, right? That is what I thought. But having the mind of criminal investigator, with experience as an FBI investigator, Hansen saw more.

Via email Hansen wrote, “When Obama appeared on the Ellen Show and told 6 year old Macey ‘we haven’t actually made direct contact with aliens yet’ I couldn’t let the opportunity pass by.”

“I do these videos now more out of obligation, because I don’t think anyone else will look at them with the same type of OCD detail that I go through them,” Hansen continued.

What could Hansen possibly be able to analyze from an exchange that took less than a minute? He says he was able to “glean” the following:

1) We can prove that this interview was preplanned with questions and answers known beforehand (we speculate that the Kimmel interviews had some of this, but it’s not as obvious as this interview).

2) Everything indicates that Obama deliberately and precisely delivered his words to answer Macey’s question, yet he didn’t directly answer it.  His selective wording leaves a lot open for interpretation.  This could allow him to still “technically” tell the truth, while covering up what he knows.

3) Obama’s answer asserts that he IS in a position to know.  Whether true or not, he speaks as if he’s coming from a position of authority, being informed by those who have information.

4) His statement is contradictory to his previous statement on Jimmy Kimmel that he can’t reveal any information.  His inconsistency could indicate that the disclosure situation is evolving or that he’s been told to issue blanket statements of denial instead of continue the cloak and dagger routine that he may know something. 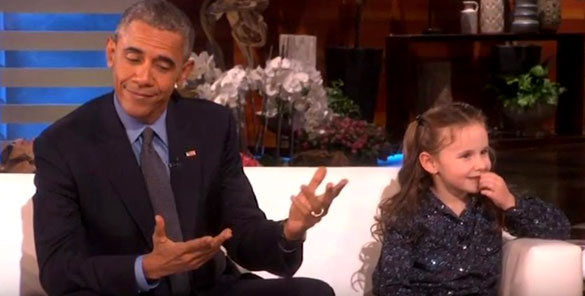 Hansen’s video analysis is very interesting. He posted it on YouTube and can be seen at the top of this story. Check it out, then let us know what you think. Is Hansen over analyzing presidential UFO jokes, or is he on to something?