Home / Articles / Pub and crop circle HQ develops Alien Abduction Ale
In the nexus of the crop circle phenomenon, Wiltshire, England, there is a pub by the name of The Barge Inn, home to some creative brew meisters providing ales for the Croppies (crop circle enthusiasts). 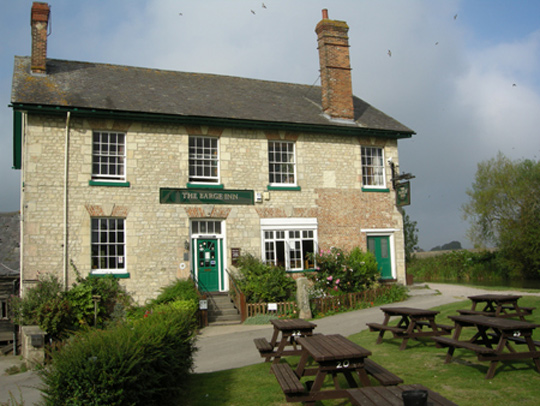 In the nexus of the crop circle phenomenon, Wiltshire, England, there is a pub by the name of The Barge Inn, home to some creative brew meisters providing ales for the Croppies (crop circle enthusiasts). This year they claim their new Alien Abduction Ale will help keep their campers from being stolen away by extraterrestrials. 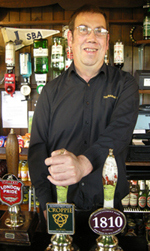 The Barge Inn actually enjoys a bit of fame. I recognized a picture of the pub, not being fortunate enough to have visited it in person, and realized it was in an episode of Inspector Morse, an English police series that ran on BBC. I watched the series on PBS, my favorite channel incidentally. The Barge Inn is also referred to by some as crop circle headquarters.

Wiltshire has been a hot spot for crop circles for many years. People from around the world flock to the area every summer to experience the phenomenon in person. While the abundance of circles per year has diminished from its peak in 1990, which saw over 500 circles in one season, there are still dozens of them appearing every year.

The Barge Inn’s new beer has been rumored to glow in the dark, although that cannot be confirmed by their website. However, the website does have an abundance of bombastic claims of its own. They claim that, “drinking up to 3 pints of the beer a day (two pints for ladies) gave a 93% protection rate from alien abduction.” The pub’s webmaster certainly has a great imagination and sense of humor.

In fact the site claims that a local farmer told them, “I’m going to buy a barrel and put some in the cows feed. They’re always being beamed up and it affects the yields. Thank goodness someone is taking the problem seriously at last.” 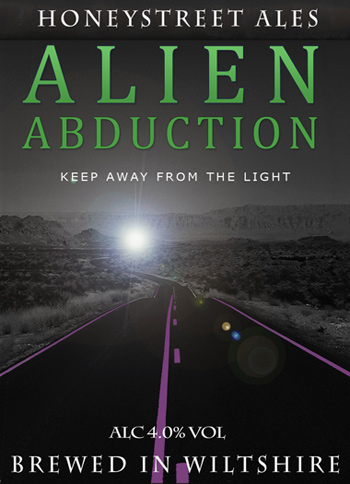 While the beer’s ability to glow-in-the-dark is in question, it is green, and it isn’t the only paranormal ale they brew. Croppie is one of their signature brews. 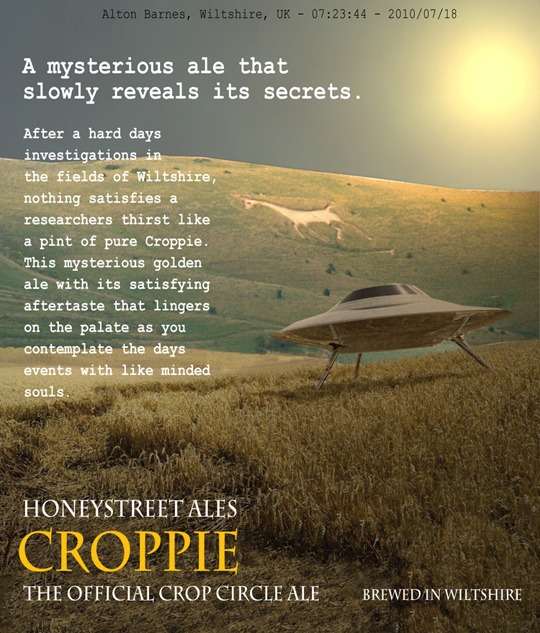 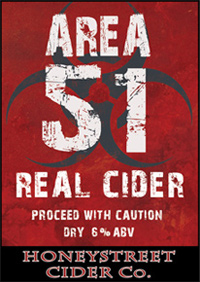 They also have an area 51 Cider:

The legend that is Area 51 has been the subject of intense curiosity. What goes in to it? Are the stories about aliens and UFO’s true? Who really developed this potent liquid? They call it real dry cider, it has a light aftertaste, a mysterious golden colour and a 6% ABV. Why do they deny any alien involvement in its production? They say, it is made only from real apples and contains no secret ingredients; we say, try it for yourself, but proceed with caution. The truth is out there…

The pub’s paranormal appeal has not eluded the local media. The Daily Telegraph has written, “The easiest way to get to the Barge Inn is by UFO. Exit intergalactic space at the Milky Way, follow the signs to the solar system, hang a right at Mars, and over Wiltshire zero in on the cluster of crop circles.”

Visit The Barge Inn’s website for more humorous musings about their beer and history. Hopefully one day we can all meet there for a pint. Visiting their site definitely makes me long for a Crop Circle research outing, with a night of enjoying freshly dispensed ale. That is, of course, before we go and spend the rest of the evening staking out the hills to try and catch a glimpse of a circle being formed first hand.