Home / Articles / Unacknowledged Aviation: Brilliant Buzzard
The “Brilliant Buzzard” was born out of an Air Force need to continue dependable access to space in 1983 after multiple space shuttle launch delays... 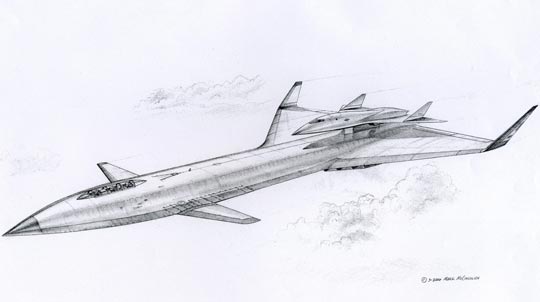 The “Brilliant Buzzard” was born out of an Air Force need to continue dependable access to space in 1983 after multiple space shuttle launch delays, and the Challenger explosion of January 28th, 1986. The hypersonic (beyond Mach 5) strategic reconnaissance Brilliant Buzzard incorporated elements of the SR-71 and the NAA XB-70, and was designed and built by Lockheed’s famous “Skunk Works” ADP (Advanced Development Projects) division, with Rockwell retained as a structural sub-contractor. The Brilliant Buzzard was designed to be a TSTO (Two-Stage-To-Orbit) space-plane capable of carrying out both military satellite insertion, and reconnaissance missions anywhere in the world in less than three hours. Originally conceived by Ben Rich, Mickey Blackwell, and Melvin Gene Salvay (Skunk Works engineers), the Brilliant Buzzard was comprised of two separate components. The large “Mothership” measured 276 feet in length, and had a crew of three. The pilot, co-pilot aka reconnaissance officer, and launch control officer were positioned at the extreme foreword section of the craft. Capable of attaining altitudes exceeding 120,000 feet, the mothership can fly faster than mach 5, or 3,300 mph. A pair of retractable canards were located just aft of the third crew member, which could be deployed during slow flight conditions (take-off and landing), and fully retracted at speeds exceeding Mach 3. The primary structure of the Brilliant Buzzard consisted of a composite titanium/Corbamite (element 140) material. 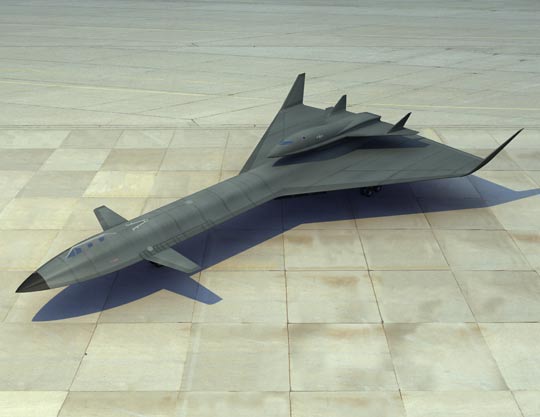 The Brilliant Buzzard incorporated an elongated fuselage with smooth contouring chines that ran down the sides of the craft (identical to the SR-71), and terminated into a blended triangular delta wing configuration and had a wingspan of 120 feet. The belly of the vehicle sits 10 feet off of the ground. Sixteen foot tall winglets were located on each outboard wingtip, and were canted 15 degrees away from the centerline of the aircraft. The “Mothership” was powered by two high-bypass turbo-ramjet engines burning liquid methane/LOX (liquid oxygen), and were housed in separate rectangular “box-like” nacelles that hung down from under the bottom of the wing. These combined cycle Pulse Detonation Wave Engines (PDWE) are mechanically simple, and can operate at altitudes of up to 30-50 km, and speeds up to Mach 10. PDWE powerplants use a shockwave created in a detonation to compress a fuel-oxidizer mixture prior to combustion. A cylindrical chamber designed specifically to support detonation combustion is constructed with a flat or contoured forward end which serves as a “thrust wall”. Each nacelle measured 40 feet in length, and terminated at the trailing edge of the wing. The large diagonally cut air-intake inlets hang down seven feet from the wing, and are large enough for a VW beetle to fit inside. A tricycle landing gear configuration (two wheels on the nose, and four on each main) was incorporated on the Brilliant Buzard, with the nose gear located just aft of the canards. The M-151 was funded by the “Black Budget”, procured by Ronald Reagan’s “STAR WARS” program, and went fully operational in 1984 after two years of flight testing. The actual term “Aurora” referred to a pre-existing family of hypersonic vehicles.

The smaller parasitic aircraft which sits on top of the mothership has a crew of two, and measures 90 feet in length. The craft utilizes a blended 75 degree swept wing configuration with twin vertical stabilizers that are cut off at the top. The “XR-7 Thunderdart” uses two scramjet (supersonic combustion ramjet) engines burning liquid methane with a boron based additive, and incorporates a small liquid hydrogen rocket to place two 1,000 pound classified NSA military satellites/payloads into orbit. It carries multi-spectral sensors such as optical, radar, infrared, LIDAR (Light Detection And Ranging), and CEIR (Computer Enhanced Imaging Radar) which has an accuracy of 1” to 30,000 miles. It collects real-time digital intelligence, images, and illuminates targets. Capable of Mach 15 or a little over 10,000 mph, the XR-7/SR-74 “Scramp” (Scram-jet and Rocket Propulsion) aka XOV (Experimental Orbital Vehicle) is air-launched from the Mothership approximately 250 nautical miles from its target. The SR-74 cannot take-off from the ground, and can only be launched from it’s mothership at altitudes above 100,000 feet where it can reach orbital altitudes of 800,000 feet or 151 miles.

Evidence for the existence of the Brilliant Buzzard comes from multiple sources including eyewitness and “earwitness” reports from residents of the Palmdale/Lancaster area. Witnesses described a high speed aircraft characterized by a very loud, deep, rumbling roar reminiscent of heavy lift rockets. When observed at medium altitude, this aircraft type often makes a pulsing sound, and leaves a thick, segmented smoke trail or contrail.