Home / Articles / UFO sighting by Mexican President Luis Echeverría
The tone was light-hearted and it seemed the issue was going to be dismissed as a joke when the president frowned and simply said, “I have seen a UFO.” 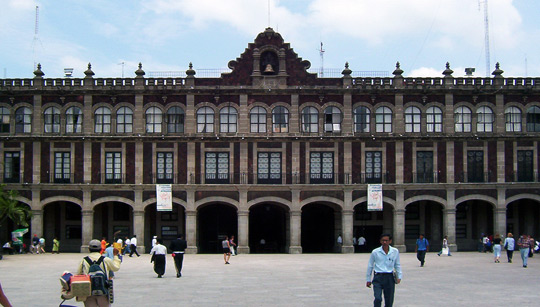 The Palace of the Government in Cuernavaca, Mexico. (image credit: Adrián Flores/Wikimedia Commons) 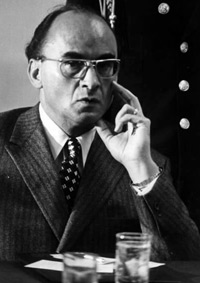 UFO sightings by heads of state are always an important milestone because it shows that this phenomenon reaches all walks of walks of life, including politicians and national leaders. The sightings of two American presidents, Jimmy Carter and Ronald Reagan, are well known, and now we can add one by Luis Echeverría Alvarez, who served as president of Mexico between 1970 and 1976. The story comes from Pedro Ferriz, a pioneer Mexican ufologist, radio broadcaster and author, who alluded to it as far back as 1978 in his book Los OVNI y la Arqueología de México (UFOs and Mexican Archaeology).

While mentioning some dealings he had with the Mexican president Gustavo Días Ordaz in the 1960s, regarding a UFO petition to his government, Ferriz wrote in this book: “I also had a long informal conversation with the licentiate Luis Echeverría Alvarez, about his personal observation of a UFO in Cuernavaca, together with the licentiate Cervantes del Río, his wife, and the great Mexican choreographer Amalia Hernández. A single sighting can be more convincing than reading a thousand books.” (The term licenciado—licentiate—is used very often in Mexico and other Latin countries, meaning basically someone who holds an academic degree.)

Born in 1922 in Mexico City, Echeverría is a lawyer and career politician with the PRI (Spanish acronym for the Institutional Revolutionary Party), which ruled the country for decades following the Mexican Revolution of the 1910s. He rose in the PRI hierarchy by serving as personal secretary of the party president, General Rodolfo Sánchez Taboada, following by appointments as Secretary of the Navy, under-secretary of Public Education and eventually Secretary of the Interior (called in Mexico Minister of Government) during the administration of Díaz Ordaz in the 1960s. He won the presidential campaign as the official PRI candidate on July 5, 1970 and was inaugurated President of Mexico on December 1, 1970. 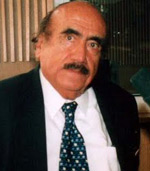 I recently came across a more complete account of the president’s UFO sighting in an article written by Pedro Ferriz titled, “El apagón de Cuernavaca. El ovni que vio un presidente” (The Cuernavaca blackout, the UFO seen by a President), published in the official website of the Mexican Association of Communication Media (AMMC), which you can read in Spanish here. As far as I know, it has never been reported in English until now. Ferriz begins describing how he graduated as a lawyer at the UNAM (National Autonomous University of Mexico) as part of the 1939 generation which included many prominent political and cultural figures, even future presidents. After mentioning some of these characters, he goes on to describe a breakfast of broadcasters with President Luis Echeverría during the fourth year of his term, 1974, which he attended as former president of Mexico’s National Association of Broadcasters. The conversation touched upon many subjects, eventually getting into UFOs, which all the attendees knew was a topic dear to señor Ferriz. The tone was light-hearted and it seemed the issue was going to be dismissed as a joke when the president frowned and simply said, “I have seen a UFO.” There was a sudden silence in the room as the broadcasters weren’t sure if the president was joking or not. Echeverría then proceeded:

The other day, on the night of the blackout, we were in Cuernavaca with Amalia Hernández (the great Mexican choreographer, founder of the Folkloric Ballet of Mexico) and my wife María Ester, on the terrace of the modest house that I have in Cuernavaca. Suddenly we saw something like an illuminated pen, a UFO, that is what we call a mothership [that seems to be a commentary by Ferriz], on the horizon, which provoked the blackout in Cuernavaca. The craft didn’t move from there and I told an assistant, ‘talk to licentiate Reyes Heroles,’ who lived in another house next to them. ‘The licentiate said he already saw it.’ And thus there we were looking at that really unusual phenomenon, and I thought about you—he said—then Pedro was right.” Everyone was astonished at what licentiate Echeverria had just said. 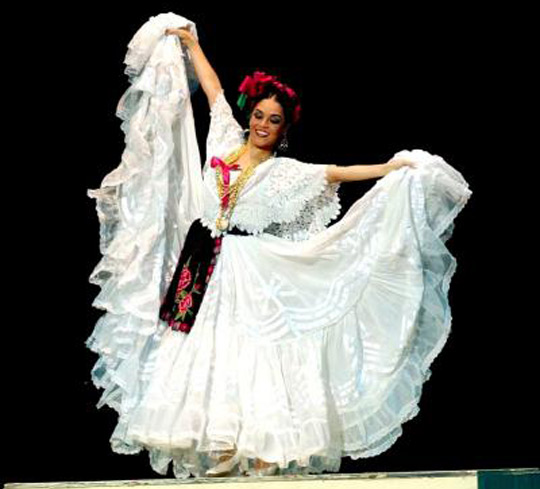 If that is not enough, Ferriz then describes a different meeting that took place a couple of months earlier in which President Echeverría described exactly the same event. Ferriz was not present this time but was told about it by an acquaintance, Jorge Z. de la Colina and his wife Lupita, daughter of a famous Mexican broadcaster. They went on to describe the inauguration by President Echeverría of an apartment complex of an outfit known as ISSSTE (acronym for Institute for Welfare and Social Services of State Workers). There were about 200 people and following the inauguration ceremonies they gathered at the dining facilities of the complex for some refreshments. It was at this point that Echeverría said, “What would you think of a president who has seen a UFO?” And then he answered, “Well, that he is possibly mad. Well, then you have a mad president because Amalia Hernández, my wife María Ester and I saw a UFO on Sunday.” He then proceeded to tell the sane story repeated in the breakfast with the broadcasters a couple of months later. 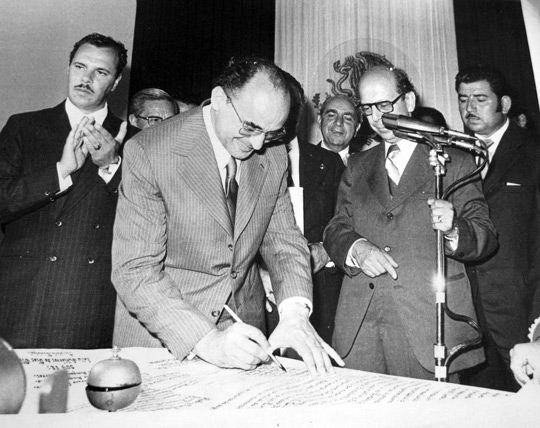 The Ferriz article is quite clear about President Echeverría and several other witnesses, including the founder of the Folkloric Ballet of Mexico, Amalia Hernández, observing a cigar-shaped luminous object which apparently triggered a power blackout in the city of Cuernavaca, capital of the state of Morelos. The exact date of the incident is not mentioned, although from the wording it would seem to be a short period before the two statements made by the president sometime in 1974. I looked for a UFO incident with a blackout in Cuernavaca in 1974 on the web, at our library in Open Minds and in my own personal archives, but found none. I did find, however, a case that fit perfectly—a multiple-witness sighting linked to a power blackout in Cuernavaca reported widely in the Mexican press—except that this one took place on the night of September 23, 1965. According to an article published on September 24 by the Mexican newspaper Ultimas Noticias, “a strange phenomenon never seen before was observed last night here [in Cuernavaca] on three opportunities: electric power was cut without cause and when the city was in darkness, an intense light first silvery which then turned red, illuminated the sky over the city.”

The article proceeds to list a number of prominent individuals who saw the phenomenon, including Joaquín Díaz González, president of the Lion’s Club, Emilio Riva Palacio, governor of Morelos state, Valentín López González, the mayor (called in Mexico Municipal President) of Cuernavaca, General Rafael Enrique Vega, chief of the 24º military zone, and others. Some of the VIPs were attending a dinner at the Lion’s Club in honor of Cristóbal Zepeda, general manager of the Commerce Bank, when the phenomenon occurred. Others like the governor, mayor and chief of the military zone were in a movie theater watching a private screening. They left the building when the blackout put a stop to the film. It would be hard to find a list of more important people in a city than the governor, the mayor, the military chief and the top business leaders. The question is whether we can now add to this list that of a future president of the republic. At the time of the 1965 Cuernavaca blackout, Luis Echeverría was Secretary of the Interior in the Díaz Ordaz administration, which is the number two job in the Mexican administrative hierarchy. 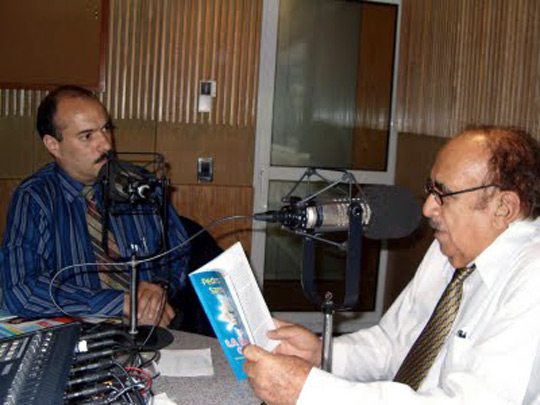 The wording of the Ferriz article implies the Echeverría UFO sighting took place in 1974 but the evidence points to 1965. Some ambiguity is allowed since the president’s quotes are not based on official transcripts or published documents but on recollections written many years later. Besides, Ferriz himself provides an important clue when he ends his article with this sentence: “This affair of the Cuernavaca blackout was confirmed to me by the governor who was at the time don Emilio Riva Palacio. This in general terms is the affair of the Cuernavaca blackout.” Riva Palacio was precisely one of the top officials listed by Ultimas Noticias as one of the witnesses to the event. He was governor of Morelos state for the PRI between 1964 and 1970.