Home / Articles / UFO case files revealed pt VII
The principle eyewitness stated that he saw equally spaced windows along the entire craft which was described as enormous in size (about the length of two Nimitz aircraft carriers). 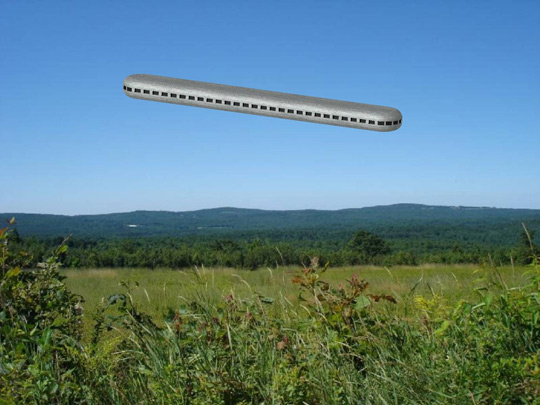 On July 20, 2005 a resident of Exeter New Hampshire had a very interesting UFO sighting. Around 3:15 PM, David was outside preparing his lawnmower. After checking the oil, he had had just finished a glass of water and then saw a large cigar shaped object hovering in the sky. The principle eyewitness stated that he saw equally spaced windows along the entire craft which was described as enormous in size (about the length of two Nimitz aircraft carriers). The object moved very slowly from west to east. The object began changing colors from a bright silver, to an orange/red. A strange cloud of red and orange flames began surrounding the object, and before he knew it, the object stretched out like a rubber band. It grew to about twice its original size, and then it was gone. 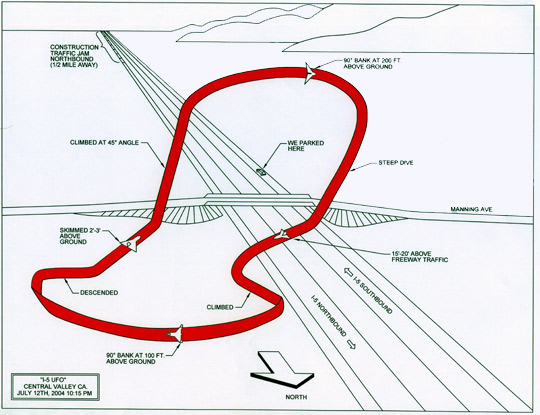 On the night of July 12, 2004 a family left the San Francisco Bay Area on a trip to New Mexico. Travelling southbound on I-5, around 10:15 PM, they encountered the famous “I-5 UFO”. The craft was triangular in shape, and was flying an aerobatic pattern over the interstate at approximately 100 mph. Its flight path caused it to swoop down low over traffic, creating a hazard to all who were driving. The eyewitnesses described the craft as looking like a “Vulcan bomber”. It had a delta wing configuration with a single vertical tail. The craft did not display the usual navigation lights as required by the FAA, but incorporated one twelve inch diameter light under the nose, and one under each wing. The craft exhibited a jet engine sounding noise as it flew overhead. There were no visible markings on the craft which also lacked landing gear. It flew a repetitive kidney shaped pattern above the freeway intersection with the overpass. 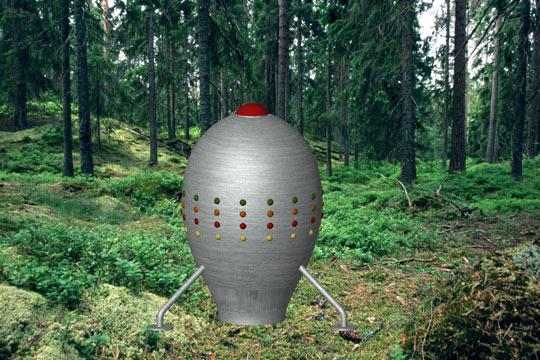 During a hunting trip on November 24, 1978 five eyewitnesses came across a strange object in a wooded area of Gerena Seville Spain. The craft which had the appearance of an inverted earthen jar, measured approximately twelve feet high with a red light on top. Three silver colored landing gear legs were also identified. Multi-colored lights were seen around the mid section of the craft. 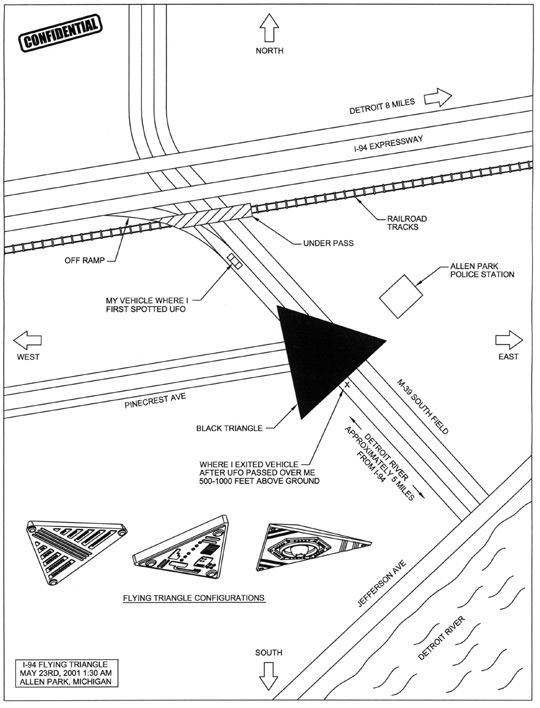 On May 23, 2001 a jet aircraft mechanic with thirty years of experience was driving back to his home in Allen Park Michigan. The time was 1:30 AM. After exiting onto M-39 (south field rd.) he sighted through the front windshield of his truck, three very bright white lights ahead of him. A triangular shaped craft was then visible, which extended beyond the width of both north and south bound lanes of M-39, and was estimated to be at an altitude of between 500 and 1,000 feet. The object passed directly over his vehicle, and made no sound.