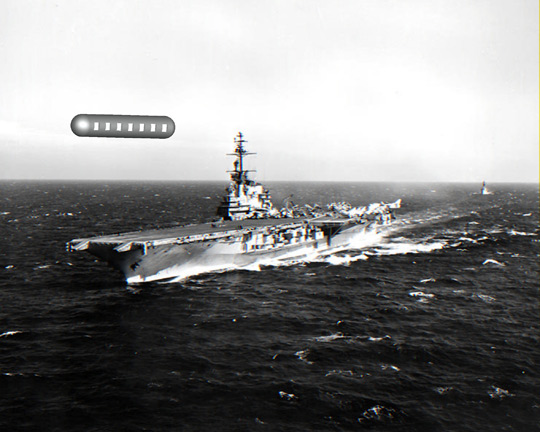 The USS Roosevelt aircraft career with a rendering of the UFO described in the report. Illistration by Michael Schratt

Late in the year 1958, a startling event involving a cigar shaped UFO, and the aircraft carrier U.S.S. Franklin D. Roosevelt (CVA-42), took place between Florida and Cuba. This report originates from Chester Grusinski, who was one of the original Naval officers on-board the carrier when the event took place. Around 9:00 PM, a significant commotion began to spread below decks. Naval personnel began rushing up the ladder to the flight deck. Once “top side”, at least 25 eyewitnesses reported seeing an oblong shaped craft which was orange in color, and seemed to be following the ship. As the strange object descended to within approximately 100 feet above the flight deck, its cigar shaped appearance was clearly visible (see illustration depicted in a daytime setting for clarity). The craft had a row of seven widows running along its length. At least two occupants were visible inside the craft, who were observing the officers on the flight deck (see official sketch below). Many of the witnesses reported seeing what looked like heat distortion waves coming from the craft.

When the craft departed at a high rate of speed, it turned a red-orange color, and emitted heat which was felt by the crew. An interesting historical note to this case included in the original report, indicated that this was not the first encounter that the U.S.S. F.D.R. had with UFO’s. Indeed, during “Operation Mainbrace” in 1952, photos of a UFO were taken from the deck of the ship. Two additional sightings involving the ship occurred in 1956, while it was at anchor in the port of Rio de Janeiro. A final sighting also took place in 1973. One possible explanation as to why the F.D.R. had so many sightings may be due to the fact that it was the first aircraft carrier allowed to transport nuclear weapons.  The fact that there were multiple eyewitnesses, and that the object was tracked by the ship’s radar, make this one of the strongest cases in Ufology. 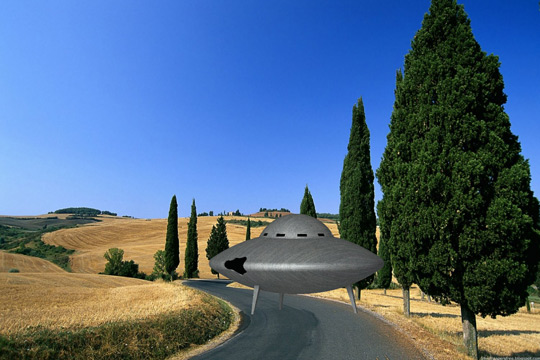 On March 30, 1995 a local farmer (Mr. Jan Pienaar) had an encounter with a strange craft in the vicinity of Transvaal South Africa. It was around 8:30 A.M., while driving his vehicle around a curve in the road, that Mr. Pienaar noticed a strange craft parked approximately 240 feet in front of him. Immediately, the engine in his brand new truck stopped. The craft had three landing gear legs which extended across the entire length of the road. It was estimated to be approximately thirty six feet high. The exterior surface resembled a translucent stainless steel color. There appeared to be seven rectangular port holes or windows in the upper dome of the craft. A red/violet/green glow illuminated the hull, and Mr. Pienaar noticed that there was a hole of about two feet in size located on the outer edge. The strange object emitted a sound which was described as a buzzing “electric beater”.

At this point, Mr. Pienaar got out of his truck, but instantly realized that he could not take another step. It was as though the craft had trapped him in a strange magnetic lock. He was held in this position for approximately three to four minutes, after which the UFO suddenly rose into the air. Then, the craft sped away at a high rate of speed. Mr. Pienaar was then able to regain his mobility, and walked the few steps back to his truck. With the electro-magnetic effects of the craft now removed from his vicinity, he had no problem starting his vehicle. Mr. Pienaar returned to the location of the encounter thirty minutes after the event, and noticed that the pavement where the craft had landed was still scorching hot to the touch. 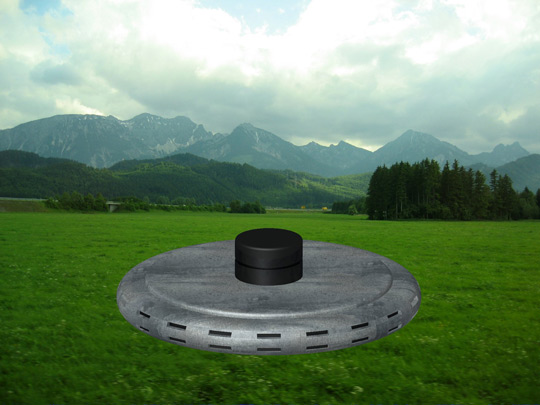 On July 9, 1952 Oscar Linke and his eleven year old daughter Gabriella were returning home on a motorcycle, when a tire blew out near the town of Hasselbach Germany. While walking back to town, Gabriella noticed something in the distance. Mr. Linke then walked in the direction that his daughter had pointed out, and noticed two men about 450 approximately feet away. They were wearing shiny metallic clothing, and were stooped over, clearly looking at something on the ground. Mr. Linke approached until he was about 30 feet from the men, and noticed a large object about 50 feet in diameter. The craft was described as looking like a “frying pan”.  There were two rows of rectangular port holes around the outer circumference of the craft. There was a black cylindrical tower approximately nine feet high on the top of the object. At this point Gabriella called out to her father, which must have alerted the two men that they were nearby. Immediately, the two men jumped on the black tower, and disappeared inside the craft.

Then, the area around the square port holes began to glitter. Its color first appeared green, but later it turned to red. A slight hum was heard coming from the strange craft. While the brightness and the hum increased, the black tower began to slide down into the center of the object. The entire object then began to rise slowly from the ground, and rotate like a top. The black colored conical tower which originally was seen on the top surface of the craft now appeared on its bottom surface. The object was now surrounded by a ring of flames, and was at least 10 feet in the air. Next the black tower disappeared into the center of the craft, and reappeared on its top surface. Then the craft rose to a horizontal position, turned toward a neighboring town, and then gaining altitude, disappeared over the forest in the direction of Stockheim.