Astonished at what she was witnessing, Rosa was further surprised to find two small beings who emerged from behind the craft.

On the morning of November 1, 1954 Rosa Dainelli had risen early to attend church services in the town of Cennina Italy. She was carrying a hand full of carnations which were to be placed at the alter of the Madonna Pellegrina. On the trip to town, she followed the footpath that leads through fields and thickets. She went barefoot, hoping to avoid getting her new shoes dirty. Rosa had taken this trip multiple times before, and never expected to encounter anything unusual. Arriving in the middle of a small clearing, she came across a very strange looking craft. The unknown object resembled a diamond shaped “spindle”, or two ice cream cones attached by their widest ends. 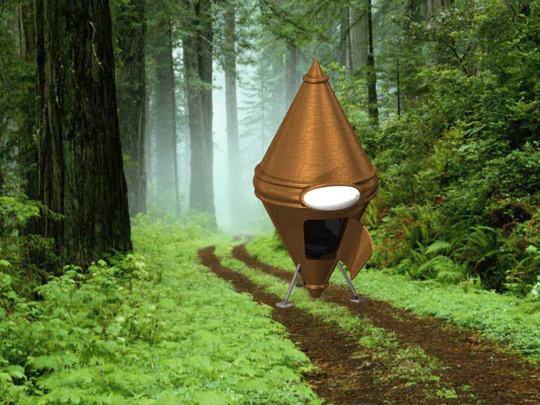 An illustration of the craft described by Rosa Dainleeli by Michael Schratt.

It measured seven feet high, and three feet wide. The strange craft had a brown metallic polished exterior color, with three landing gear legs. Rosa could not hear any sound emanating from the craft. An elliptical shaped white colored protrusion was located at the mid-section of the craft. The lower section of the object had an opened hatch door which revealed two seats. Astonished at what she was witnessing, Rosa was further surprised to find two small beings who emerged from behind the craft.

They appeared to look like men, but were actually the size of small children (around three feet tall). Their noses were of normal shape, but their upper lips were slightly curved in the center.  Eventually, the beings approached Rosa, and seemed to be friendly. They were wearing one piece grey colored overalls which extended down to their feet. They also wore grey colored capes on their backs, and their ears were concealed by two leather looking discs which formed a rudimentary helmet. A small band wrapped around their foreheads. In an attempt to strike up a conversation with Rosa, the small beings uttered the following unintelligible expression: “liu, lai, loi, lau, loi, lai, liu”. 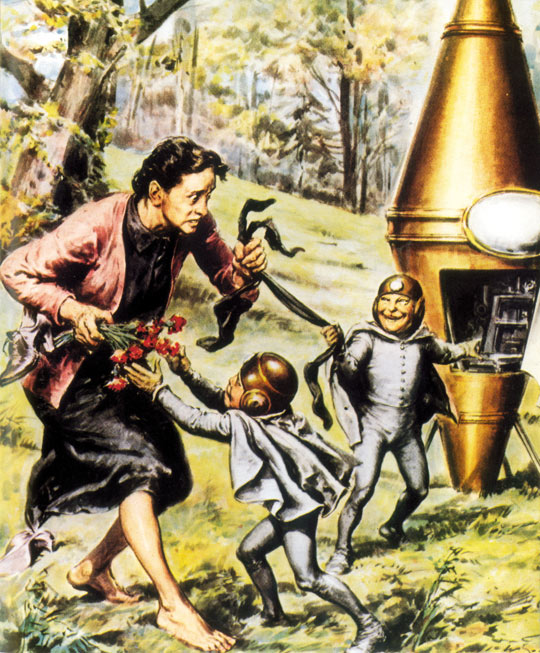 Illustration of Rosa Lotti-Dainelli’s encounter by Walter Molino, published by the Domenica del Corriere on November 14, 1954.

Then, the two beings approached Rosa who was now in a state of shock. They proceeded to snatch the carnations out of her hand, but then quickly returned a few of them (keeping a total of five). Then, as though they were examining the biological make-up of the flowers, and laughing during the process, the beings threw the remaining flowers into the opening of the spindle shaped craft. Soon thereafter, the small beings reached inside their craft, and took out two small white packages which were circular in shape. As they turned towards Rosa, they found her running from the scene. By the time she covered a distance of 300 feet from the craft, Rosa looked back one final time only to discover that the beings and the strange craft had mysteriously vanished. Sources: Flying Saucer Review September/October 1972, Jacques Vallee case No. 24.

For more on this story, check out Issue 4 (October/November 2010) of Open Minds magazine.