Home / Featured / No salvation for aliens, according to creationist Ken Ham 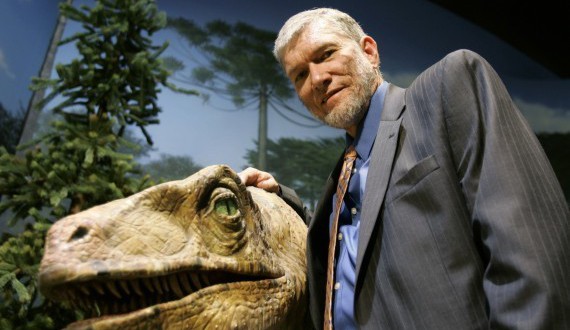 No salvation for aliens, according to creationist Ken Ham

Creationist Ken Ham doesn’t believe extraterrestrials exist. But, if they do, they are destined for hell.

Now Ham is generating headlines again because of recent comments about extraterrestrial life and its non-existence. On July 20, Ham posted a blog on the Answers in Genesis website in response to a NASA panel discussion at which NASA astronomer Kevin Hand stated, “I think in the next 20 years we will find out we are not alone in the universe.”

Naturally, Ham disagrees. He first criticizes the “desperate and fruitless search” for extraterrestrial life. Then he responds, “The Bible, in sharp contrast to the secular worldview, teaches that earth was specially created, that it is unique and the focus of God’s attention (Isaiah 66:1 and Psalm 115:16). Life did not evolve but was specially created by God, as Genesis clearly teaches. Christians certainly shouldn’t expect alien life to be cropping up across the universe.”

He firmly discounts the notion of extraterrestrial life. But, if alien life does exist, Ham explains that any such life will be out of luck when it comes to judgment day. He details,

You see, the Bible makes it clear that Adam’s sin affected the whole universe. This means that any aliens would also be affected by Adam’s sin, but because they are not Adam’s descendants, they can’t have salvation. One day, the whole universe will be judged by fire, and there will be a new heavens and earth . . . An understanding of the gospel makes it clear that salvation through Christ is only for the Adamic race—human beings who are all descendants of Adam.

The Pope seems to believe differently, however, after recently approving of baptizing Martians.

Ham’s comments understandably prompted news outlets to write stories with headlines like “Creationist Ken Ham Says Aliens Will Go To Hell So Let’s Stop Looking For Them” and “Ken Ham: NASA Is Pointless Because Aliens Are Going to Hell Anyway.” Although these headlines accurately represent Ham’s sentiments, he took offense, claiming, “secularists and some media outlets have been falsely accusing me of saying space aliens are going to hell.” He feels these headlines unfairly represent his comments because he doesn’t believe in aliens.

So, in response to said headlines, Ham posted a video with Answers in Genesis astronomer Dr. Danny Faulkner in which the two “search the heavens for aliens using a telescope.”

The point the two are attempting to make in the video is that NASA should keep looking for extraterrestrials because they won’t find any. And that lack of detection only bolsters Ham’s “aliens don’t exist” position.