Some have accused The New York Times of burying the lead in their recent article No Longer in Shadows, Pentagonʼs U.F.O. Unit Will Make Some Findings Public. The article covers the recent request by the Senate Select Committee on Intelligence (SSCI) that the Director of National Intelligence (DNI) standardizes the collection of reports on unidentified aerial phenomenon (UAP) and provides public reports on those findings.

The U.S. government has long denied having any interest in the topic. But a New York Times article in December 2017, exposed a secretive program at the Pentagon called the Advanced Aerospace Identification Program (AATIP) ran by military intelligence official Luis Elizondo. The UAP report request by the SSCI seems to be a direct result of the revelation of AATIP and the cases they studied.

However, two-thirds of the way into the article, another startling claim is made.

“Mr. Elizondo is among a small group of former government officials and scientists with security clearances who, without presenting physical proof, say they are convinced that objects of undetermined origin have crashed on earth with materials retrieved for study,” claims The New York Times.

The New York Times does not provide a quote, nor do they reference the source for this claim. However, a similar question was asked of Elizondo by Tucker Carlson on Fox News in May 2019.

Elizondo responded: “I do, yes.”

Carlson clarified: “You think the US government has debris from a UFO in its possession right now?”

Elizondo responded: “Unfortunately, I really have to be careful of my NDA. I really can’t go into a lot of more detail than that, but simply put, yes.”

In an interview with Elizondo on Open Minds UFO Radio in June 2019, I sought further clarification on Elizondo’s answer to Carlson. I said I interpreted his response that the UFO material answer was something he believed, but couldn’t prove. Elizondo replied, “I didn’t say that.” He would not talk about the topic any further.

If The New York Times was using Elizondo’s interview on Fox News to paraphrase his beliefs, there was never mention of UFO crashes. However, I have confirmed with Elizondo that he is comfortable with how the New York Times represented his stance.

Elizondo was not the only one who The New York Times claims believes the U.S. government had retrieved crashed UFOs. The article also claimed that former Senator Harry Reid, who helped create and secure funding for AATIP, said, “crashes had occurred, and that retrieved materials had been studied secretly for decades.”

However, they retracted that statement. The correction states, “Mr. Reid said he believed that crashes of objects of unknown origin may have occurred and that retrieved materials should be studied.”

Again, there is no reference as to where they got this information. The only quote from Reid used in the story was not changed.

Reid’s quote reads: “‘After looking into this, I came to the conclusion that there were reports — some were substantive, some not so substantive — that there were actual materials that the government and the private sector had in their possession,’ Mr. Reid said in an interview.”

“I have no knowledge—and I have never suggested—the federal government or any entity has unidentified flying objects or debris from other worlds. I have consistently said we must stick to science, not fairy tales about little green men,” read Reid’s tweet. 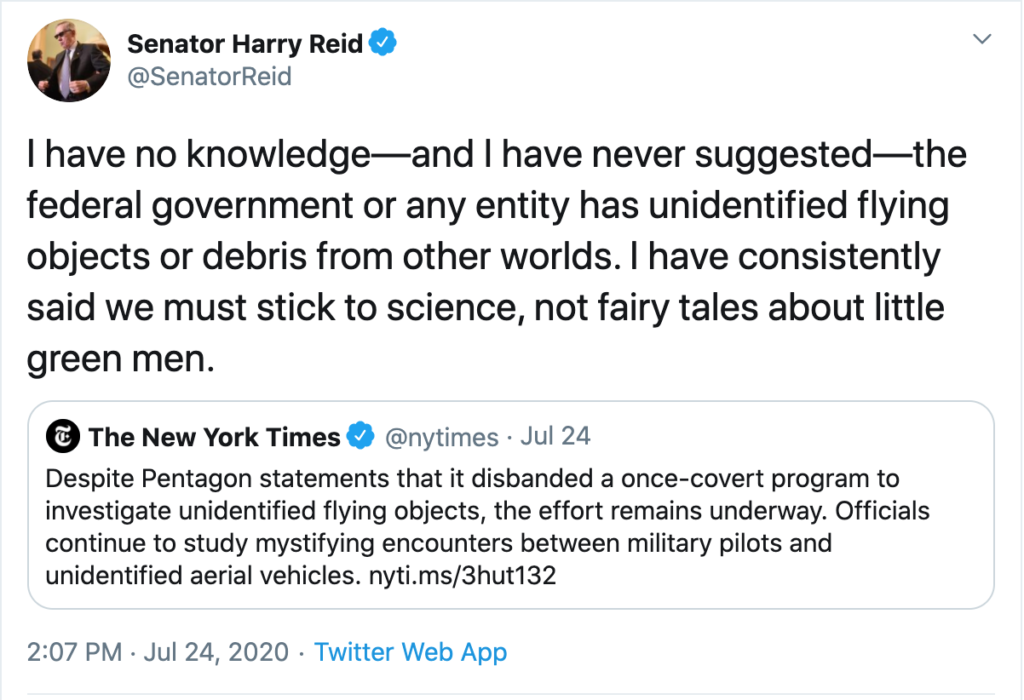 “For me, this has never been about proving other worlds exist. Thousands upon thousands of people have reported seeing unidentified aerial phenomena. ‘Unidentified’ doesn’t mean other-worldly. It means of an unknown origin. I want to find out what this is, where it’s from, what it means to our national security,” Reid told Knapp.

Although Reid and Elizondo never mention UAP or UFOs having off-world origins, a scientist who worked with AATIP does.

“Eric W. Davis, an astrophysicist who worked as a subcontractor and then a consultant for the Pentagon U.F.O. program since 2007, said that, in some cases, examination of the materials had so far failed to determine their source and led him to conclude, ‘We couldn’t make it ourselves,’ wrote The New York Times.

“Mr. Davis, who now works for Aerospace Corporation, a defense contractor, said he gave a classified briefing to a Defense Department agency as recently as March about retrievals from ‘off-world vehicles not made on this earth,'” claims The New York Times.

Although The New York Times did not list it as a correction, the last paragraph previously said Davis briefed members of the SSCI. John Greenewald of theblackvault.com noted on twitter this was changed to what you see above, and that the briefings were now allegedly to staff members. 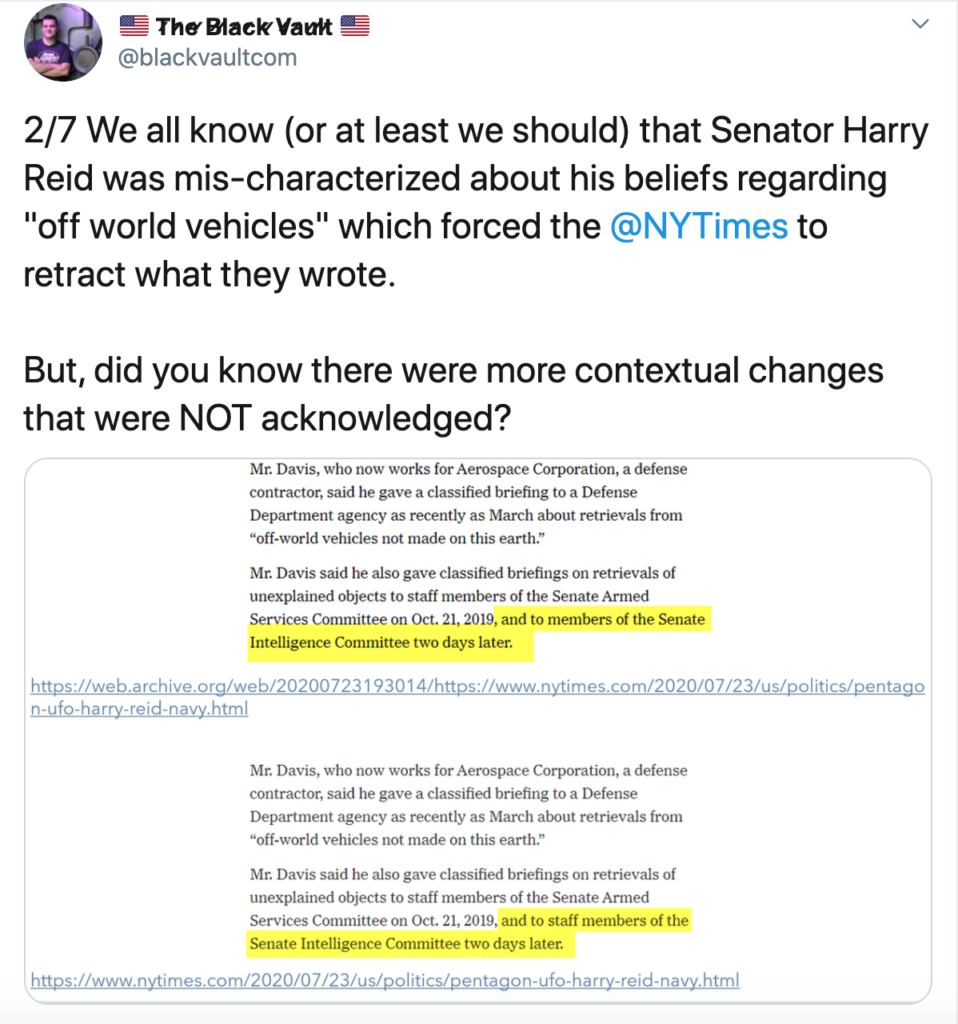 Although these briefings were said to be classified, Davis revealed much of what he knows about UFO crashes on his latest appearance on Open Minds UFO Radio.

Davis says, “even though these things (aliens?) behave like a conscious, spiritual, psychic entities, they do have advanced technology, they have hardware, and there’s a craft, and there’s occupants.”

Davis went on to say the crash retrieval program was minimal with limited staff and resources.

“I do know that the program was terminated 1989,” says Davis, “for lack of progress in reverse engineering.”

According to Davis, scientists could not figure out the technology. He says, “So many years go by, and they’ll try it again.”

And how does he know this information? Well, it is not first-hand. Davis says he’s worked on classified programs for many years, and his colleagues know he has an interest in UFOs. He is occasionally approached by scientists who tell him about working on these projects.

If this information is classified, we were fortunate he shared so much of it with us on Open Minds UFO Radio. However, it is hearsay. The question remains whether Davis has more substantial evidence to prove his claims, or whether or not the staffers Davis briefed took this information to SSCI members.

I recently contacted Davis to get an update, but he says his current employer is not permitting him to speak on the matter as it involves classified information.

However, the authors of The New York Times article, Leslie Kean and Ralph Blumenthal, who are the same who penned the December 2017 article on AATIP (with Helene Cooper), doubled down on their claims. In a recent interview, they say the quote by Reid was accurate, although it is not the quote that is in question, it is the paraphrasing.

In a follow-up article titled, Do We Believe in U.F.O.s? Thatʼs the Wrong Question, Blumenthal and Kean writes:

“Numerous associates of the Pentagon program, with high security clearances and decades of involvement with official U.F.O. investigations, told us they were convinced such crashes have occurred, based on their access to classified information. But the retrieved materials themselves, and any data about them, are completely off-limits to anyone without clearances and a need to know.”

The headlines claiming the Pentagon has retrieved crashed alien spacecraft are inaccurate, that is not what The New York Times article says. However, there are those close to the secretive Pentagon UFO program who seem to believe that might be the case. Thus far, these extraordinary claims are lacking extraordinary evidence.