A California witness at Davis reported watching and videotaping a triangle-shaped UFO as it slowly passed overhead that first emitted the sound of horns and trumpets playing, according to testimony in Case 43950 from the Mutual UFO Network (MUFON) witness reporting database.

The witness reported that his dog seemed anxious and he took it outside at 1:43 a.m. on October 2, 2012, when the incident occurred. The video can be seen above. 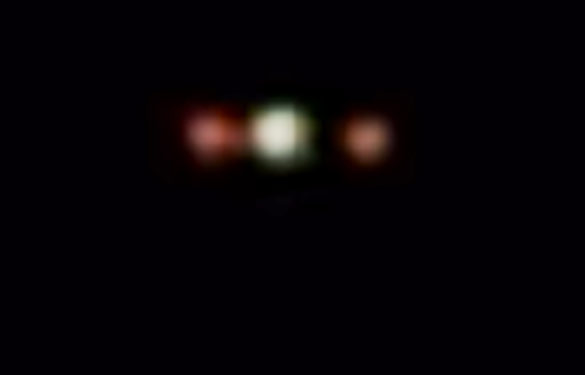 The witnesses’ dog seemed to want to go outside when the UFO incident began. Pictured: Cropped and enlarged still frame from the witness video. (Credit: MUFON)

“I remember hearing a loud sound, of what seemed like horns, or trumpets from all around,” the witness stated.“I remember it being very early in the morning, maybe near two a.m., and thinking, why isn’t anyone else waking to this sound.”

The dog may have also heard the sound which caused the anxiousness.

“I thought about it later, and thought maybe my dog had heard the sound, and that is why she wanted to go out. So On October 2nd, when my dog did this again I was much quicker to go outside. Again I heard the horn/trumpet sound, though this time it seemed a bit muted, almost like I was hearing it in a vacuum, similar to hearing the ocean in a seashell.”

The witness first reviewed the horizon and saw nothing.

“Then from overhead I noticed what appeared to be a triangle of lights, with what appeared to be randomly moving lights running between each of the triangle points. It was very large, and all I could really see were the lights, and definitive darker, more shadowed area within the confines of the lights on the corners.”

The object continued to move away in a southern direction and reached a point on the horizon where is seemed to remain still, or in a relatively central location for a few minutes. 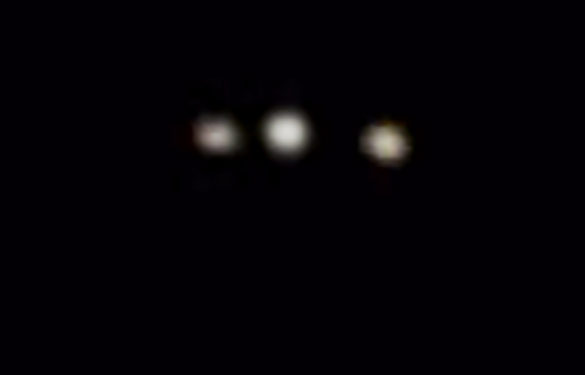 The lights appear to be attached to a triangle-shaped object. Pictured: Cropped and enlarged still frame from the witness video. (Credit: MUFON)

“I was able to get 31 seconds of video with my cell phone, and then the battery died. The video was shot prior to it reaching the location on the horizon where it hovered,and I opted to stay and watch it, as opposed to trying to go in and get a quick charge on my phone to record more video – which is what I did after watching it hover for a few minutes on the horizon. When I returned to try to record more, it was gone.”

The case was reported to MUFON on November 16, 2012, investigated by Assistant State Director Devlin Rugne, and closed as an Unknown.

“When they went outside he heard a loud sound that seemed like horns or trumpets all around,” Runge stated in his report.“He had heard this same sound the previous night, but this night, it seemed more muted, like he was hearing it in a vacuum, similar to hearing the ocean in a seashell. He couldn’t understand why no one else in the neighborhood was hearing this. He noticed overhead what appeared to be a triangle of lights with what appeared to be randomly moving lights running between each of the triangle points. It was very large and the only thing he could really see were the lights and a more definitive darker, more shadowed area within the confines of the lights on the corners. It continued moving away from him in a southerly direction and reached a point on the horizon where it seemed to hover for a few minutes.”

“The object passed overhead at 90 degrees and when it hovered it was under a mile away over the tree line. It moved very slowly and was large. He said the sound was ‘troubling’ and the three lights at each ‘corner’ were red and stationary, their position is what gave him the impression that the craft was triangular in shape. The sound was like a ‘harmonic’ orchestra – lots of horns and trumpets. The sounds were ‘light tones’ and ‘deeper tones.’ The craft was darker in color than the sky. The colored lights didn’t show up until the craft was hovering over the tree line. The colored lights were in a random pattern and appeared to be ‘jumping around.’ His dog did not bark and was up against the witness’ leg – showing fear. The sighting duration was about 20 minutes. I asked if he noticed the time when he went back inside for the night and he did not. There were no other instances or any kind of poltergeist activity that evening.” 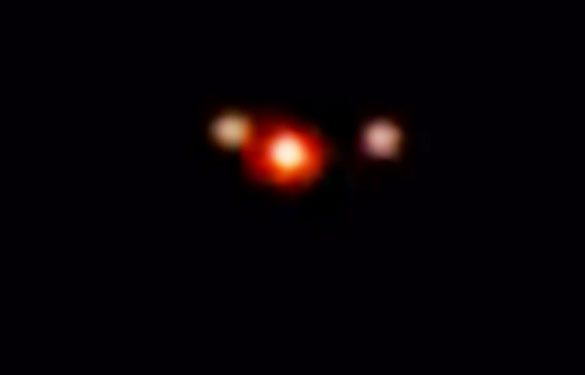 The witness heard music when he first saw the UFO. Pictured: Cropped and enlarged still frame from the witness video. (Credit: MUFON)

“I believe the video shot of this object shows an unknown craft. With this craft traveling overhead it gave the witness a clear view of the total light configuration and the witness felt he was seeing an unusual craft. The sound coming from this unknown craft was unusual in itself and ‘troubled’ this guy because he couldn’t in his mind connect the sound with what he was seeing. His dog must have heard it as well because it was the dog that initially got the witness to take him outside a couple of nights in a row. The dog was frightened while the object was being seen and flying overhead. I’m closing this case out as an unknown aerial vehicle.”