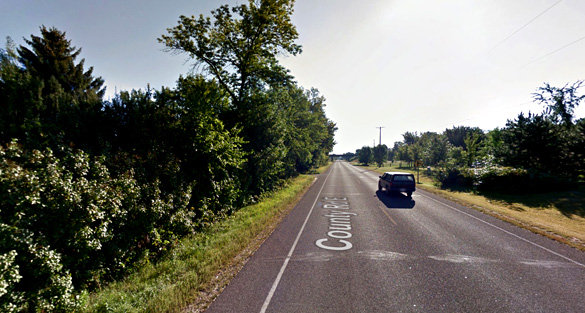 A Wisconsin witness at Eau Claire recalls a UFO event from 1985 that involved a silent, slow moving object and a police officer, according to testimony in Case 72184 from the Mutual UFO Network (MUFON) witness reporting database.

The event occurred on August 13, 1985, while the witness was traveling along County Trunk E (Cameron Street) with a friend.

“I commented to my friend that oncoming traffic was extremely fast- around 75 to 80 mph,” the witness stated. “Normal speed limit is 55 mph. As we passed westbound Kane Road I noticed an Eau Claire County squad car parked on the wrong side of the road with its red lights flashing.” 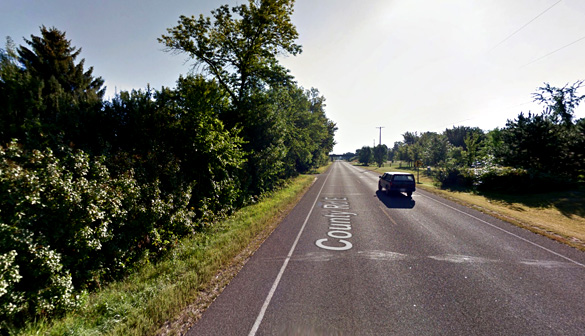 The witness was driving along Cameron Street approaching the Kane Road intersection, pictured, when the incident occurred. (Credit: Google)

The time was about dusk so the witness got a good look at the officer with his hands up to his face using what appeared to be binoculars looking to the western sky.

“I thought that was strange right off the bat.”

But then the witness encountered the object that the officer was apparently looking at.

“As we traveled over a hill we noticed two lights coming at us from a distance. The lights were quite bright and on the right and left outboard portions of the object. I commented at how low it was. I further commented that I thought it was going to crash.”

As the witness closed on the distance between vehicles, they were concerned that the unknown object was going to crash on top of them.

“We were at about 20-25 mph at this time. We came broadside to the UFO. It stopped in the sky at angle to us. I opened the car door and looked from the extreme front to the extreme rear – approximately 100 yards or better in length. It was suspended without nose at about a 60-degree angle from our position. I know that I could have hit it with a slingshot.” 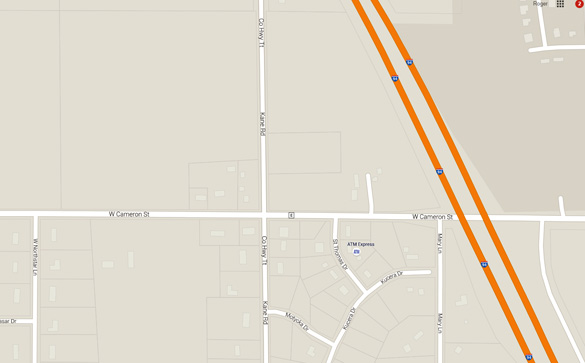 “We could also see that the craft was cylindrical and the front, the rear and left and right portions appeared like airliner fuselages. This was evident because the bottom was dark and became lighter and lighter as we viewed toward the top of the craft where it was very bright. We did not see any windows or otherwise distinguishing characteristics. The object looked like two cigars intersecting each other at 90-degree angles.”

As darkness set in, two lights along the outboard portions of the craft came on.

“There wasn’t any noise, but you could feel the energy in the atmosphere. Night time became bright daylight over a pond just off the road. I commented that it was a UFO and she – my friend – floored our Trans Am a few miles to get home. She had tears streaming from her eyes as I was telling her to stop the car. When we got home I grabbed my camera and returned to the scene, but it was gone.”

The witness has never forgotten what happened that evening in 1985. 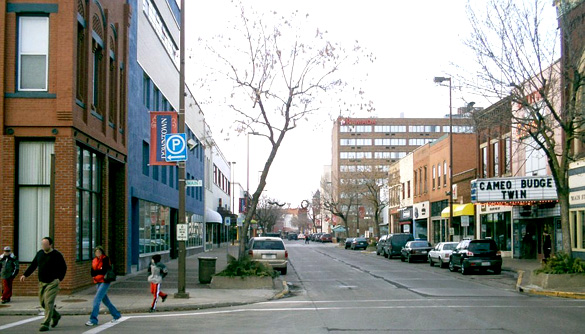 “I got to thinking about it after the years and after seeing your shows. I called our local airport (Eau Claire Municipal Airport) and they stated that there wasn’t any traffic at that time. Not to mention that our airliner jet traffic had ceased several years before this incident. Okay. Maybe so as far as nothing on their screen. I called our local sheriff’s department and they said that nothing had been reported. A few weeks back I am thinking that not only us two had seen this craft. Someone radioed the deputy to pull over on the overpass and look to the west. That was not by coincidence. Thought this may be of interest to you.”

Eau Claire is a city in Chippewa and Eau Claire counties in the west-central part of Wisconsin, population 65,883. Please remember that most UFO sightings can be explained as something natural or man-made. The above quotes were edited for clarity. Please report UFO activity to MUFON.com.