In January of 2009, a research team from Open Minds paid a visit to photographer Arturo Robles Gil at his home in Mexico City, Mexico. Robles had been documenting mysterious objects in the sky with some frequency, and Open Minds hoped to capture closer, higher quality photos of these UFOs above Mexico City. The team and I arrived at Robles’s home at approximately 8:00 AM to get an early start scanning the skies.

Extreme air pollution in Mexico City builds as the day progresses, so sky viewing is best done in the early morning. Robles observes many mysterious objects in the sky from the vantage point of his building’s rooftop. After evaluating the location, the Open Minds team set up a camera with the hope of photographing one of these sky creatures. This high-powered camera kit included a Nikon D3x (Nikon’s flagship 24.5 megapixel digital SLR camera) and a Sigma ultra-telephoto zoom lens (APO 200-500mm F2.8/400-1000mm F5.6 EX DG), the largest high speed zoom lens available. At the time of this trip, this premiere lens was one of only two existing in the United States. 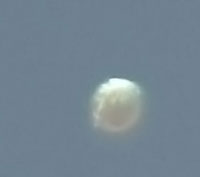 For hours, commercial airline traffic was all I saw in the sky. Just as I was about to give in to my waning interest, I was jolted with adrenaline when I heard Robles shout, “I see something!” I followed the direction of his pointed finger, but could see nothing with my naked eyes. The object was only barely visible with the assistance of binoculars, but it gave us a general direction in which to point our powerful camera lens. Weighing more than 34 pounds, and having a length of more than 28 inches, this massive setup is best operated by two people—one to control and aim the monstrous lens on the tripod, and one to control the shutter on the camera. I jumped behind the camera, and with the assistance of our team leader, I began searching for the elusive object in the sky.

Once I had successfully spotted the sky object in the camera, I focused the lens, and I began snapping photos. I had trouble remaining focused on the task of capturing as many images as possible because I was so amazed at what I was observing on the camera’s 3-inch super-density LCD monitor. My initial thought was, “This might be a weather balloon,” but after only a couple of seconds, I was convinced otherwise. Even though the object was nearly 20,000 feet away, I could clearly see it on the screen, and the object reminded me of a creature I have seen many times before—not in the sky, but in the sea. I can best describe the characteristics and movements of the object as jellyfish-like. The object was semi-see through, and it billowed and undulated as it moved. I believed I was watching a living creature, not a balloon or a rigid mechanical craft. 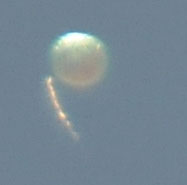 The UFO and its fiery tail (credit: Jason McClellan/Open Minds)

The translucent object was swimming through the blue sky, changing both shape and color as it moved. Yes, it is possible that the yellow and white pulsing colors were simply the sun’s rays reflecting off this object, but the colors also gradually morphed into red, green, and blue. The creature was spherical with a fiery, glowing tail. The characteristics of this tail and the billowing of the sphere made the object even less likely to be a balloon. The sphere portion of the creature appeared to have veins, or some sort of cranial membrane, adding to its biologic appearance.

Less than two minutes later, the creature slowly disappeared from sight. The once-translucent object became completely transparent and vanished. I remember trembling as a result of both adrenaline and disbelief at what I had just seen.

To this day, I can only describe—but cannot fully explain—what I observed in the sky above Mexico City.