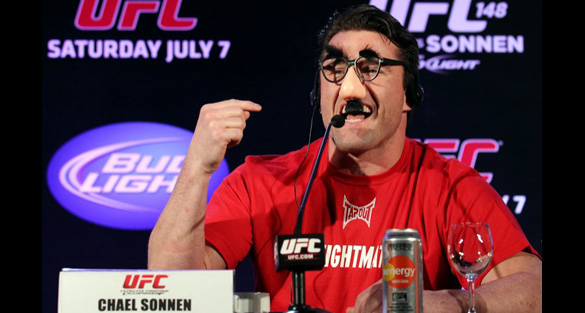 Chael Sonnen is a mixed martial artist who has participated in the Ultimate Fighting Championship, and for unknown reasons decided to share his opinions on UFOs this week on the Fox Sports UFC blog. Although he says he is interested in the paranormal and has tried to find books on it, most of his UFO information comes from a strange character that lurks around the UFC scene.

The blog is a little difficult to follow. It begins with Sonnen describing his local book store and his trouble finding titles on paranormal topics. He then writes about a strange guy he kept seeing at UFC events.

Eventually, he met this fellow and found out he likes to talk about UFOs. The man has never given Sonnen his name, but he allegedly has written books on UFOs. Sonnen says this man’s information has helped him develop his own UFO theories.

Most of the rest of the blog is debunking many popular UFO events. Here is a sample:

The UFO phenomenon is anything but new. We commonly associate it with a very famous, and altogether innocuous, event that occurred in 1947 in the Pacific Northwest, when an amateur pilot and crackpot named Kenneth Arnold reported a group of Unidentified Flying Objects, which he described as “skipping”, not unlike saucers skipping over water, as they traveled across his flight-path and line of sight. It being an exceptionally slow news day, and the country’s paranoia level already inflamed with reports of the military aeronautical potential of the Russkies right across the border (Sarah Palin can explain the actual mechanics of the Russo-American Border, and the tension that existed, and still exists, because of it), the story was picked up by various wire-services, which functioned as clearing-houses for news and information (you might not be mistaken by describing the wire services of the past as a kind of “Proto-Internet”, in fact).

Sonnen does concede that there is something to the phenomenon. He even believes it has influenced religions. He writes:

There are examples too frequent to even elucidate of unexplained airborne phenomena (usually associated with light) interacting with people, and influencing history. The Catholic Church, one of the most influential and enduring institutions on earth, owes its existence, in part, to a UFO event; the blinding and temporary incapacitation, and subsequent conversion, of Saul of Tarsus by a blinding light, and a voice that spoke to him. Because of this event, he then became St. Paul, one of the founding figures in the Catholic Church.

He finally sums his opinion up as, “there IS a definite, documented, phenomenon. It’s just not ‘extraterrestrial’; it’s ‘meta-logical.’”

However, his moments of semi-clarity quickly devolve back into more cryptic ramblings. He admits he does not know what the nature of the phenomenon is, but he says he is going to find out. He says in order to do this he needs all of our help to get him pardoned. Pardoned from what he does not say. 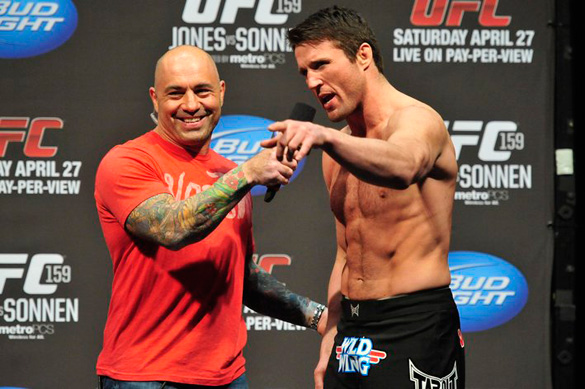 Sonnen says that once he is pardoned he can get elected president and appoint Joe Rogan as vice-president and Sarah Palin as head of Homeland Security.  The culmination of his master plan will be to “sic” Rogan and Palin on the “phenomenon of UFOs.” He says, “Joe & Sarah will solve this mystery faster than Carlos Mencia steals jokes at the Comedy Store from actual comedians who write their own, original, comic material.”

His final piece of advice is to not waste your time looking for UFOs, “If it wants you, it’ll come find you, like it found Moses, Joan of Arc, or Saul of Tarsus.”

So there you have it. For what it is worth. Some sage advice about the UFO phenomenon from an ultimate fighter brought to you by Fox Sports.

If you have problems finding books on UFOs, check out our online UFO store. It has been my experience that purchasing books online when my local bookstore does not carry many UFO titles has been a much more fruitful and educational option. I have not found the information given to me from anonymous strangers to be all that valuable or coherent.