Mysterious multicolored lights were captured on video in the sky above Cave Creek, Arizona.

UFO with multi-colored lights captured on video in AZ 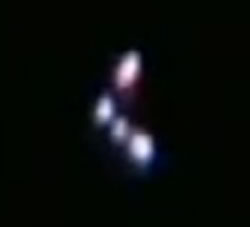 Mysterious lights in the sky above Cave Creek, Arizona were recently recorded on video.

This V-shaped UFO was reportedly observed by multiple witnesses on February 19, 2012 near Cave Creek, a town just North of Phoenix. The video recorded shows an object in the night sky with multi-colored lights, which blink and dance in various patterns. Two videos of this UFO were recorded and submitted to the local chapter of the Mutual UFO Network (MUFON) on February 26, 2012. Phoenix MUFON is currently investigating this case.

ABC15 (KNXV), the local ABC affiliate, states, “Some believe the lights are nothing more than a kite with LEDs attached or some type of radio-controlled airplane with LEDs.” Attaching LED lights to kites or RC airplanes has rapidly grown in popularity, as it allows for night flying, in addition to creating fascinating visual effects. These objects are quite visible in the night sky, and therefore kites with LEDs have resulted in many UFO reports recently.

Based on the object’s appearance and behavior in the video, a kite with LED lights is the most likely explanation, but no official identification has been made.

What do you think about this UFO? Share your thoughts with us on the Open Minds Facebook page.