Normally UFOs are spotted in the sky. However, the U.S. Space Walk of Fame Museum in Titusville, Florida, caught a UFO on video inside of the museum on their surveillance camera.

Charlie Mars, the president of the U.S. Space Walk of Fame Museum, told WKMG News, “We can’t explain it, nor can the (person) who put in the system for us.”

Some of the staff of the museum believe that the objects could be floating dust balls. However, Mars says both times the orbs were caught on video, the lights and the air conditioners were off. He has another idea,

Mars told WKMG, “There were many items in here that were brought in by people who are no longer with us. They could be coming back to check on it.” 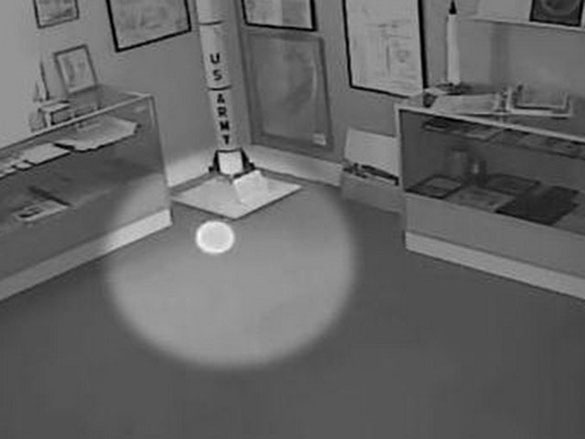 A still image of the mysterious orb which has been speculated to be a ghost, alien, or dust particle. (Credit: U.S. Space Walk of Fame Museum)

Mars says it would not be the first time they have experienced unexplainable activity since moving into the 100-year-old building in which the currently reside.

“We have had a number of things like that have occurred over the past 10 to 12 years that we don’t have an explanation for and we do love speculating about it,” said Mars.

Having unexplained phenomena occur in the building doesn’t scare Mars. He welcomes it.

Mars says, “We love having something come in that is unexplainable, and it gives us a chance to interchange with each other and talk about what it will possibly be.”