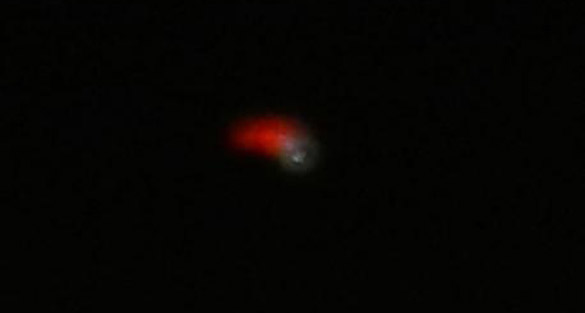 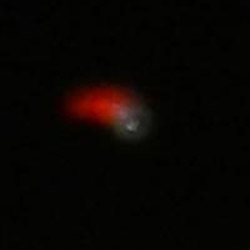 Close-up of the UFO in the photograph from Bromley. (Credit: News Shopper)

A woman in the town of Bromley, a suburb of London, has sent a local newspaper a photograph of a UFO she took on April 27. She says the object looked very large and was also witnessed by her daughter.

She went to her bedroom window where she says, “…in the distance I could see a big aircraft with all these lights.”

I couldn’t make out the shape of whatever it was but I could see it was quite a large because the lights were so far apart. I tried to get my husband up but he didn’t take any notice. My daughter got up and she said she saw this big circular thing with all these lights. I don’t know whether there is another type of aircraft we don’t know about, but it just didn’t look like anything I have ever seen before.

The witness told the News Shopper that she believes the object passed within around 200 feet of her window, and flew above the rooftops of the homes in her neighborhood.

She says, “It was a strange ship because of where the lights were. It was not normal.”

The UFO above the trees and houses in Murray avenue in Bromley. The amber lights are from houses; the red light above is the UFO. (Credit: News Shopper)