A UFO appeared in the skies above northern California in the early morning of Friday, September 12.

At least thirty witnesses in the bay area watched the strange object streak across the sky at approximately 6:00 a.m. Some describe the object as a white light, while others say it was orange. But the light was seen with “fog or smoke billowing out” behind it. Among the witnesses is a police officer from Sacramento. 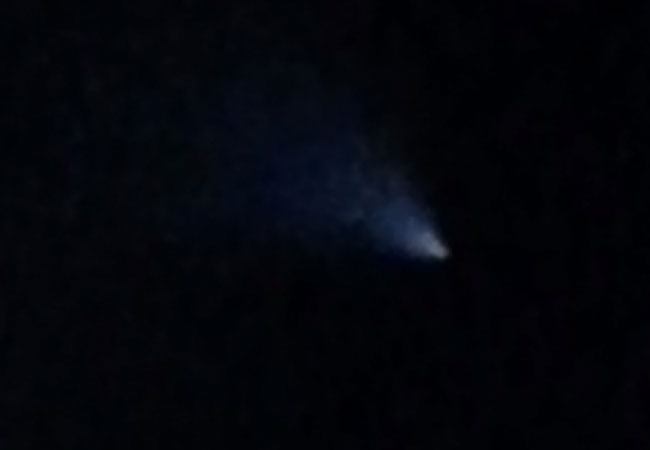 Witness photo of the UFO over northern California. (Credit: Claycord.com)

KPIX, San Francisco’s CBS affiliate, spoke with Bing Quock of the Morrison Planetarium at the California Academy of Sciences to ask him about the UFO. “Looking at the website of the American Meteor Society, it looks like there are several reports of a large bright object falling through the sky,” he explains. “It’s rather unusual in that this one had a rather large tail following behind it,” Quock points out.

The station also checked with Gerald McKeegan of the Chabot Space and Science Center in Oakland. “We’re thinking maybe it was either a piece of space junk that has fallen out of orbit and into our atmosphere or it might have been some kind of a missile test launch,” he suggests. But when KPIX checked with Vandenberg Air Force Base, base representatives informed the station that there were no launches that morning.

This morning when I was leaving for work, before I got into my car I noticed that there was some type of object in the air with a type of floodlight on, and white fog/smoke was billowing out of it – as if something was being sprayed into the air. I tried to take a photo with my iPhone but it didn’t come out . . . Could this be fogging for mosquitoes? I was a bit concerned because the object was clearly spraying some substance into the air . . . with the floodlight on. Then the light went off, and I couldn’t see or hear the sounds from a plane or anything, it was very strange.

But local daily news website Claycord.com explains that mosquito fogging in that area is done by truck, not by aircraft. Further, no mosquito fogging was planned for the day in question. Additionally, the fact that the UFO was seen by witnesses in other states including Nevada and Oregon rules out this possible explanation.

#NEW pics of mysterious object seen flying across East Bay sky this morning. Did you see it? Tweet us & let us know! pic.twitter.com/VgJddPfkCi

The strange object that streaked across the sky remains unidentified.