Home / Featured / UFO file is most popular in FBI’s Vault 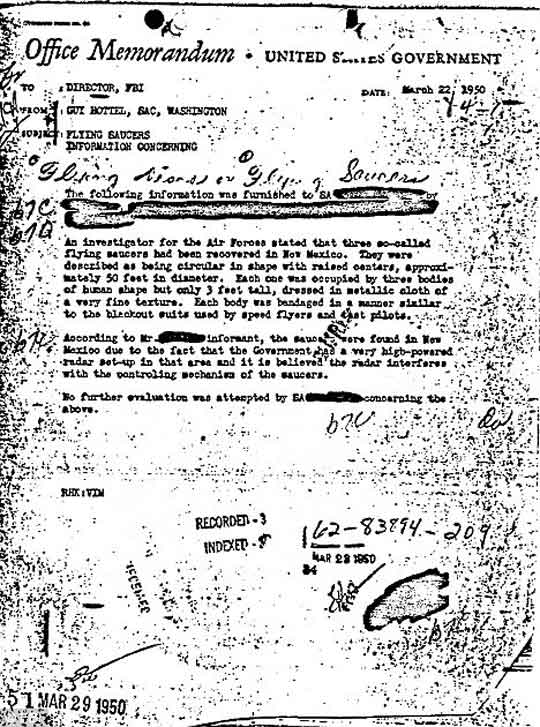 UFO file is most popular in FBI’s Vault

The FBI posted a story on their website yesterday claiming that one of their UFO files has been the most viewed document in their FBI Vault. The story, titled UFOs or No?, says the document has been viewed over a million times, even though it is only a one page memo.

The Vault was created in the spring of 2011 to be a repository for FBI documents that are commonly requested through the Freedom of Information Act (FOIA). Instead of having to repeatedly respond to FOIA requests for these documents, they can now just send people to the website.

The UFO file getting all of the attention is called the Guy Hottel Memo, and it caused quite a media buzz when the Vault was launched. The media quickly jumped on the memo, some of them claiming it was evidence that the UFO crash in Roswell, NM, in 1947 was real. Even in the reporting of the FBI story posted yesterday, some media outlets are wrongly stating that the memo was first released two years ago with the launch of the Vault. As the FBI points out in their story, the memo was actually released in the 70’s. Optical physicist turned UFO researcher, Bruce Maccabee, was the first to obtain the memo via a FOIA request in 1977. UFO researchers have been debating its contents since. 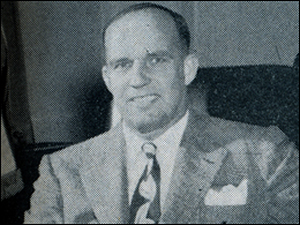 The contents of the memo are brief and curious. It was written by Guy Hottel, a special agent in charge of the Washington field office, in 1950. The subject of the memo was simply “Flying Saucers.” The first paragraph concerning where the information came from is mostly blacked out. It then goes on to say that an investigator for the Air Force has said that there were three “so-called flying saucers” recovered in New Mexico. Each had three bodies that were about three feet tall and wearing fine metallic cloth. It explains that the reason the craft are believed to have crashed in New Mexico is due to advanced radar systems that interfered with the saucers, causing them to malfunction.

The memo ends abruptly with the sentence, “No further evaluation was attempted by SA [blanked out]concerning the above.” 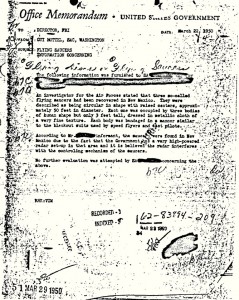 The other theory they address is one regarding the connection of this memo with a hoax circulating at the time. Their response is “the Bureau’s files have no information to verify that theory.” However, Maccabee and other UFO researchers do believe the memo is part of an elaborate hoax. The description of the UFO crashes fit closely with the claims of an oilman named Silas Newton. Newton says the information was given to him by a scientist who he referred to with the alias, Dr. Gee. Newton had convinced journalist Frank Scully his stories were real, which resulted in the publication of Scully’s book, Behind the Flying Saucers, containing Newton’s material. 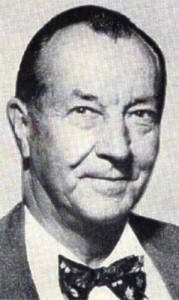 It was later found that Newton was a conman and that Dr. Gee was actually a friend of his named Leo GeBauer, who was not a scientist and did not have government connections. Prior to the publication of Scully’s book in 1950, Newton had been telling his UFO crash stories to anyone who would listen. Many believe that his stories had made it to the ear of Hottel, third-hand, prompting Hottel to note them in his memo and send it off to FBI headquarters.

The final issue the FBI addresses in the story is their involvement in UFO investigations. They admit that Hoover “did order his agents—at the request of the Air Force—to verify any UFO sightings.” However, they note that only four months after Hottel’s memo they had ceased their UFO investigations, ”suggesting that our Washington Field Office didn’t think enough of that flying saucer story to look into it.”

The FBI ends their Hottel story with an apology, “Sorry, no smoking gun on UFOs. The mystery remains…”