Drivers saw what appeared to be a flying saucer on the back of a flatbed truck. 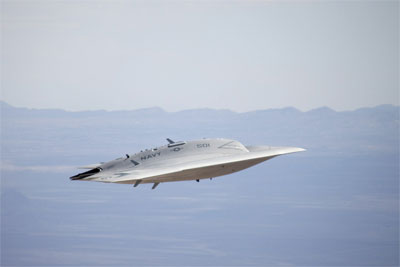 Drivers on Washington, DC’s Capital Beltway were surprised by what appeared to be a flying saucer being transported by a flatbed truck on the night of Wednesday, June 13. But according to Fox News, Maryland State Police confirmed that the strange craft was actually the X-47B unmanned drone aircraft made by Northrup Grumman. The craft was reportedly being transported from West Virginia to Patuxent Naval Air Station in Maryland.

If this sounds familiar, it’s because residents of Cowley County, Kansas also saw what they thought was a UFO being transported on the back of a truck last year. But the military reassured the public that the saucer-shaped craft was simply the X-47B unmanned drone.

NBC Washington reports that this is the second X-47B to be transported through the DC area. One reportedly arrived in late 2011, but created much less of a stir than this recent one.

The military is hinting at an increased presence of drones in the area in the coming months, cautioning people to “be careful and pay attention to the road if you’re driving when you see them!”