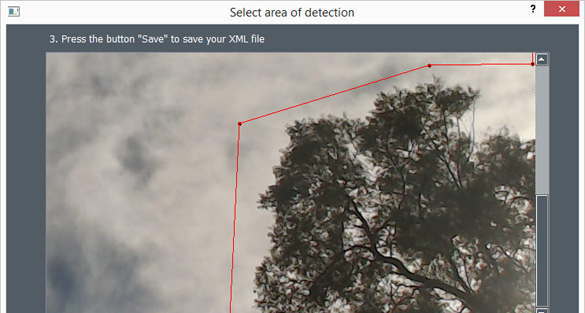 A new program uses your USB webcam to scan the skies for UFOs, and when it spots something that is not a bird, airplane, or other known object, it will record the UFO for you to review later.

The program was created by ProjectCE: Connecting Evidence, and is simply called UFO Detector. It is available for free on their website.

According to the site, the program includes a “detection algorithm that looks for light emitting object which cannot be identified.”

In other words, it will be able to detect whether the object is something mundane or not. In order to help improve the algorithm, users can submit pictures of objects that UFO Detector suspects are UFOs that obviously are not. These “false-positives” will presumably then help the software not make the same mistake in the future. 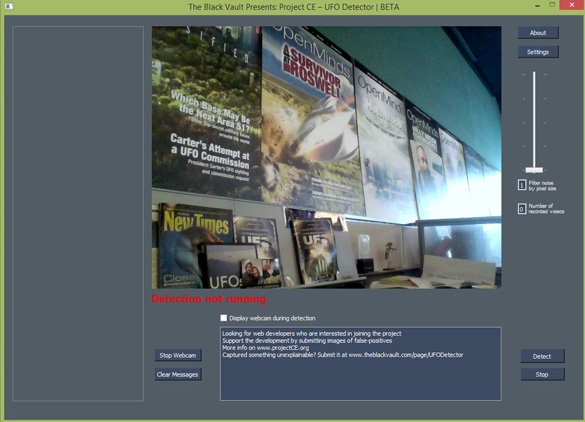 The UFO Detector software running on the Open Minds Production laptop. UFOs are easy to spot at OpenMinds.tv HQ.

When a UFO is spotted by the software it is recorded in high definition video so it can be examined later. Currently, nothing can stop a hoaxer from adding a fake UFO to the video. However, ProjectCE plans to develop a secure video format for the program to use in the future, so that tampering does not go undetected.

ProjectCE hopes that their program will help produce better UFO videos. The website states, “I believe we can have a much higher number of good footage if we change the way we have been looking for UFO’s [sic]. My Detector program allows anyone to monitor the skies day and night for possible UFO’s [sic].”

Another future goal of ProjectCE is to create an online forum for people to submit their UFO videos, get them analyzed, and discuss their findings.

ProjectCE has partnered with TheBlackVault.com in order to get the word out on their program.  The Black Vault also has instructions and a list of tips and tricks for working with the software. They have also set up a forum for users to discuss their experiences, post suggestions, and get answers to questions.

The UFO Detector Forum at TheBlackVault.com. (Credit: The Black Vault)

Good UFO videos are hard to come by, and often the ones that get the most attention turn out to be cases of mistaken identity. Maybe UFO Detector will help UFO hunters get that indisputable footage they are looking for. Check it out and let us know if you get something good.