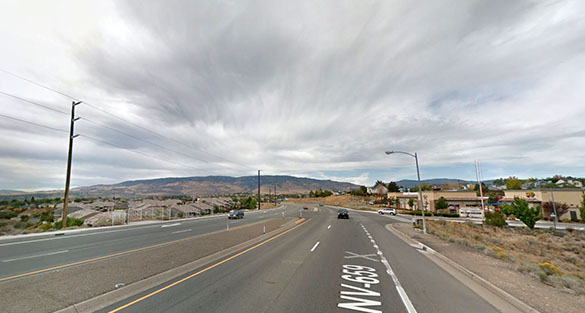 A Nevada witness at Reno reported watching a silent, triangle-shaped UFO moving “moderately fast” with lights along two edges, according to testimony in Case 80764 from the Mutual UFO Network (MUFON) witness reporting database. 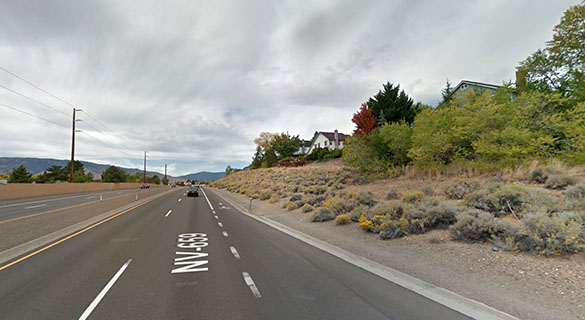 The witness was outside on his driveway unloading a Christmas tree at 6:50 p.m. on December 2, 2016, with two children when the incident occurred.

“My son was looking up at the sky and said,‘Hey guys, look up. Do you see that?’the witness stated. “He pointed it out as it was directly above us. Both means my daughter saw it. My son said he thought it was an airplane or he was just hallucinating, but after we all saw it we knew it was something else because it made no noise whatsoever and was shaped nothing like an airplane.” 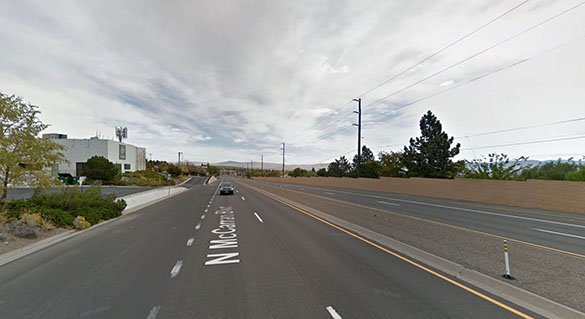 The size of the silent craft was estimated to be between 100 and 300 feet. Pictured: Reno, NV. (Credit: Google)

“It was moving in a pretty straight line towards the northwest and the Sierra mountains. The thing itself made no noise at all and appeared to be going moderately fast. The object itself was shaped almost exactly like the ‘Phoenix Lights’ in Arizona. It was very triangular; two edges came together and had lights going up the edges. Only two sides had lights, but you could see the outline of the back of it. The UFO looked big. Probably 400 feet. We were in honest disbelief afterwards. We went on the Internet to search for any stories, but didn’t find any. We then came here. It just flew out of our sight. It didn’t disappear or anything special.”

Nevada MUFON Assistant State Director Sandra Countiss investigated this case and closed it as an Unknown. 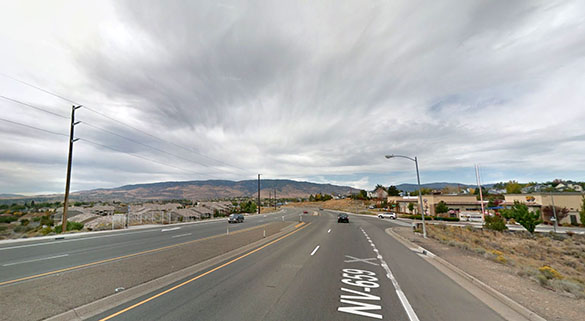 The object was seen as low as 500 feet in altitude. Pictured: Reno, NV. (Credit: Google)

“The object was triangular-shaped, but marked boomerang shape on the form,” Countiss wrote in her report.“It cast a light, hovered as it went across the sky, appeared solid and had an outline, and was glowing. The witnesses said it was triangular-shaped.  The size in the distance was about the size of a golf ball and its actual size appeared to be between 100 to 300 feet. It had white exterior lights, a black surface with unwavering lights on the exterior. There were no emissions and no sounds. The surface was dark and it glowed, structure was unknown. A helicopter was also seen in this area after the sighting. The triangular black object was about 90-degrees above the horizon when nearest to witnesses. The lowest altitude appeared to be about 500 feet. Distance from witness was unknown. The flight path was a straight line going from northwest. The area is suburban. There were three witnesses. From weather history from Reno, NV, it was an average temperature of 31 degrees, no precipitation, wind was east at 4 mph, gusting to 14 mph. Visibility was 10 miles.The craft had a black body which was big enough to block out the stars. It was a clear, cold night and visibility was unlimited. The outer parts extended farther than the lights did, flying northwest silently, hundreds of feet in size. By the time they got their cameras out and ready, it was gone.”