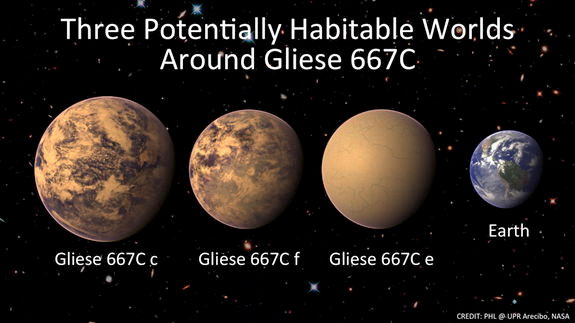 Three planets have been discovered that could potentially be home to alien life.

A team of scientists looked at existing radial velocity data from the HARPS instrument on the European Southern Observatory’s 3.6m telescope at the La Silla observatory in Chile. In reviewing this data, the international team found at least six planets orbiting the star Gliese 667C, and three of these fall into the just-right habitable zone where life-as-we-know-it might exist. 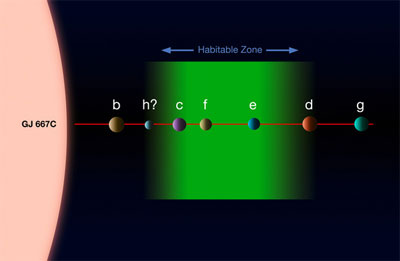 At twenty-two light years from Earth in the constellation Scorpius, Gliese 667C is part of a three-star solar system. According to Space.com, study co-leader Mikko Tuomi explained, “We knew that the star had three planets from previous studies, so we wanted to see whether there were any more . . . By adding some new observations and revisiting existing data we were able to confirm these three and confidently reveal several more. Finding three low-mass planets in the star’s habitable zone is very exciting!”

Space.com explains that “this is the first time three low-mass planets have been spotted in the habitable zone of the same star system.” Researchers reportedly believe that Gliese 667Cf is “a prime candidate for habitability.” According to Universe Today, researchers explain in their paper that this “f” planet “likely absorbs less energy than the Earth, and hence habitability requires more greenhouse gases, like CO2 or CH4 . . . Therefore a habitable version of this planet has to have a thicker atmosphere than the Earth, and we can assume a relatively uniform surface temperature.”

The team’s research was published in the journal Astronomy & Astrophysics.