A press release from the network explains, “Using dramatic reconstructions, riveting never-before-seen footage, first-hand eyewitness accounts, and expert interviews, The Unexplained Files takes a scientific look at the inexplicable, uncovering paranormal activities that have mystified scientists, inspired legends, and captured the human imagination for centuries. Many of the stories featured will reveal new evidence and bring forward previously undisclosed eyewitness accounts to shed light on stories that have baffled experts for years.”

Rita Mullin, General Manager of Science Channel said, “For season two we’ve uncovered deeper mysteries that are bound to leave our audience confounded and motivated to continue the search for answers.” Those mysteries will be covered over 12 all-new episodes and include topics such as the Mexican Chupacabra, strange pyramids in Bosnia, unexplained animal deaths, and mythical creatures. They will kick off the premiere episode by discussing the exorcism that was the inspiration for the 1973 film The Exorcist and include testimony from the last surviving witness, Brother Greg Holewinske. 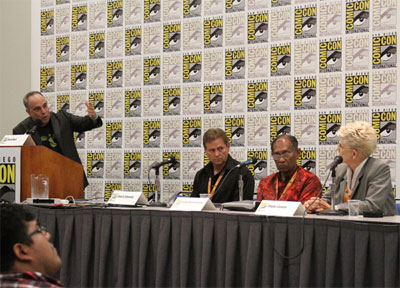 The Unexplained Files will be hosting a panel at San Diego Comic-Con to promote the show. A group of experts from the show will reveal never-before-seen footage from the series and share accounts of strange happenings. Panelists include Ken Gerhard, Troy Taylor, Chuck Zukowski, and special guest Linda Blair. Blair was the star of The Exorcist and will discuss her experiences on the set of the film. The panel will happen this Friday, June 25th at 7 PM PST in Room 7AB. For more information visit: San Diego Comic-Con.

For more information on the Science Channel’s most watched show of 2013 visit: The Unexplained Files. You can also stay up-to-date by following @sciencechannel on twitter with #UnexplainedFiles.