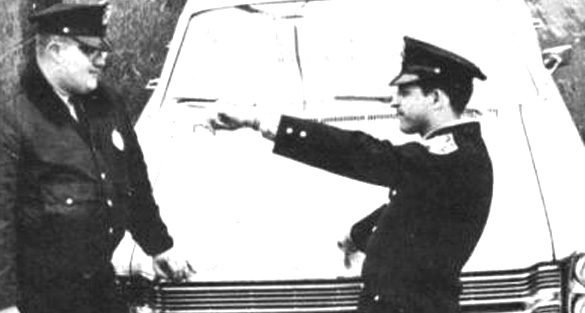 50 years ago today, on September 3, 1965, 18-year-old Exeter, New Hampshire resident Norman Muscarello, while hitchhiking on Highway 150 outside of the small, bucolic town, witnessed something incredible and mysterious. Muscarello, a recent high school graduate preparing to leave for service in the U.S. Navy, was visiting a girlfriend in Amesbury, Massachusetts, and, since he did not own a car at the time, decided he would hitchhike the eight and a half miles back to Exeter. It being well after midnight, there was very little traffic on the small two-lane highway, and he was forced to walk much of the distance.

At approximately 2 a.m., Muscarello saw in some nearby woods five bright flashing lights, colored deeply red. The lights lit up the woods and a neighboring farmhouse. Accompanied by no sound or displacement of air, the lights began moving toward him, and, alarmed by their approach, Muscarello leapt into a roadside ditch. Soon, the lights shifted away from him and moved back toward the farmhouse before finally retreating into the woods. In alarm, Muscarello ran to the farmhouse and began pounding on the door, asking for help, but there was no answer (the home belonged to the Dining family, who were away at the time of the incident). Spotting a vehicle driving down the highway, Muscarello forced it to stop. The couple in the car drove their highly agitated passenger directly to the Exeter police station. 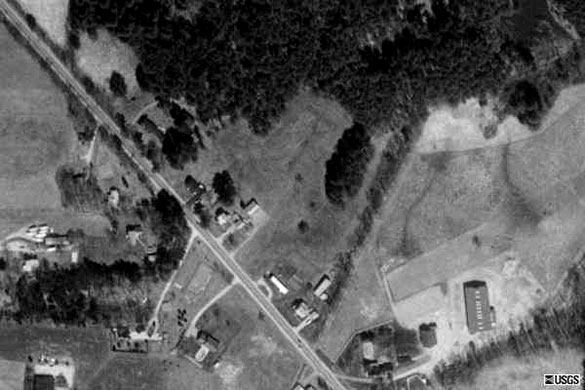 At the police station, Muscarello spoke with Officer Reginald Toland, trying his best to explain his unusual sighting. Because Toland knew Muscarello to be a young man with integrity and not given to embellishment or to be fantasy-prone, he radioed another officer, Eugene Bertrand, Jr., whom he knew to be in the area of the sighting. Toland was shocked to discover that earlier that night, Bertrand had encountered a woman pulled over on nearby 108, who had witnessed what she described as a “huge object with red flashing lights”, which followed her car for some 12 miles before disappearing into the distance.

After speaking with Toland, Bertrand returned to the police station and he and Muscarello drove out to the Dining farm to investigate. At the scene of the sighting, the two exited the cruiser and began making their way toward the woods, some dogs nearby began howling, and horses in a corral became extremely agitated. At that moment, an enormous object appeared to ascend from the woods; Bertrand later described it as an enormous dark object, the size of a barn, adorned with numerous red flashing lights.

The object then approached Muscarello and Bertrand, and, as it did, it appeared to sway left and right. Unsure of how he should react, Bertrand fell back on police protocol, withdrawing his pistol and aiming it at the giant object. Realizing that firing at the object might be ill-advised, he re-holstered, and ordered Muscarello to return to the cruiser. Radioing for backup, he and Muscarello remained in the vehicle and watched as the object hovered above them, some 100 feet distant and at an altitude of about 100 feet off the ground. The object continued to sway back and forth, its red lights flashing in a 5-4-3-2-1 to 1-2-3-4-5 pattern from right to left and then left to right—an attribute that has led some to speculate that the object was, in fact, a conventional aircraft; see below—with each cycle lasting about two seconds. All the while, the animals in the surrounding area remained in a frantic state. 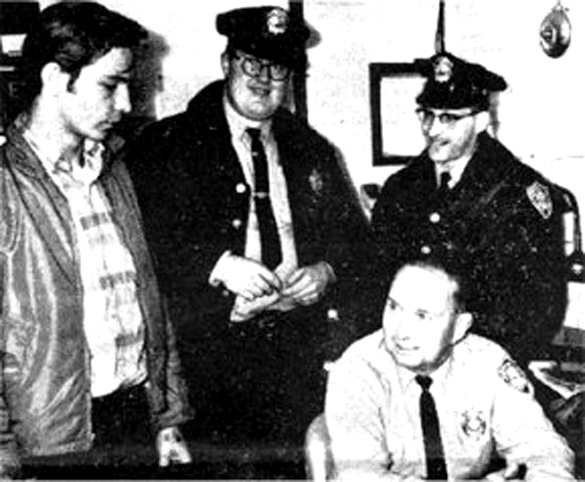 The object was also witnessed by Officer Dave Hunt, the backup whom Bertrand requested. Shortly after Hunt’s arrival on the scene, the object departed, flying back over the woods before disappearing in the trees. Not long after its disappearance, Hunt witnessed a B-47 bomber from nearby Pease Air Force Base (AFB) pass over and, as he later explained to investigative journalist John G. Fuller, author of Incident at Exeter (1966), still the authoritative account of the event, it was easy to tell the difference between the mysterious object and the B-47 and there was simply “no comparison” between the two. All three men returned to the Exeter police station and began the tedious task of filing paperwork. 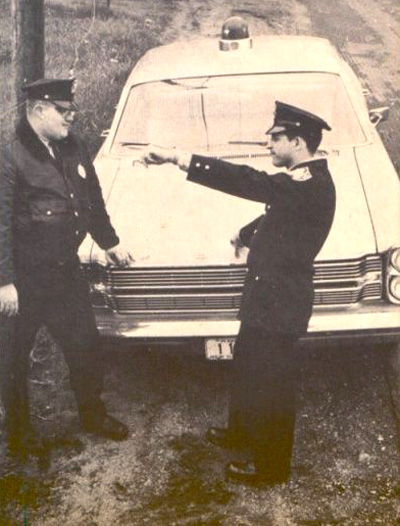 Once the news media got word of the incident, it unleashed a firestorm of national publicity. Fuller, then a columnist for the Saturday Review magazine—who while investigating Exeter would stumble on the Betty and Barney Hill abduction case, which occurred on September 19-September 21, 1961 just south of Lancaster in rural New Hampshire; Fuller would also publish The Interrupted Journey (1966), a definitive account of the case—soon arrived in town to interview the principles in the case, as well as a number of other people who also claimed to have witnessed similar strange lights in the sky. Ron Smith, a high school senior, told Fuller that, three weeks prior to Muscarello’s sighting, while driving one evening, he and his aunt and mother witnessed a glowing object that appeared white on the bottom, with a red light on top. Moreover, Officer Toland informed Fuller that around the time of the incident, the police station received numerous calls from residents concerning sightings that closely approximated those of Muscarello and Smith. (It is of course quite likely that a vast majority of these alleged sightings were attention-seeking, imaginary events, influenced by the surge of surrounding news activity.) 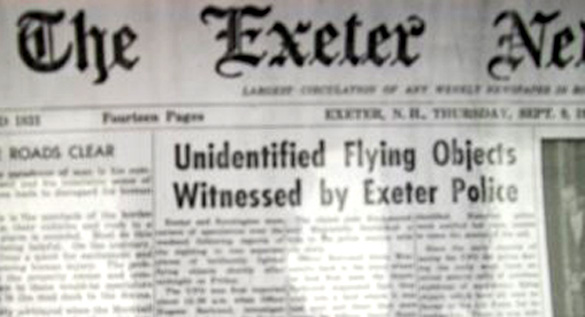 Perhaps in an effort to stymie what he perceived as an unwelcome intrusion into his community and his police officer’s time—such reports drew them away from their actual duties—Exeter’s police chief contacted officials at Pease Air Force Base, informing them of his officers’ reports. Major David Griffin and Lieutenant Alan Brandt were soon dispatched to question Hunt, Bertrand, and Muscarello, requesting that they refrain from speaking to the press. (The request came a little too late: the men had already been interviewed by a reporter from the Manchester Union-Leader newspaper). Griffin submitted a report to Project Blue Book, remarking in his report that he was not able to ascertain exactly what it was that the three witnesses saw. He remarked on the integrity of the observers, noting that, while five B-47 bombers from Pease AFB were in the air at the time of the sighting, he did not believe they were related.

The Air Force, ignoring Griffin’s uncertainty concerning the case, also released a press statement, claiming that what the men had witnessed were the twinkling of planets and stars resulting from a common meteorological phenomenon known as “temperature inversion,” in which atmospheric temperature increases with altitude, deviating from the normal decrease in temperature that should occur. 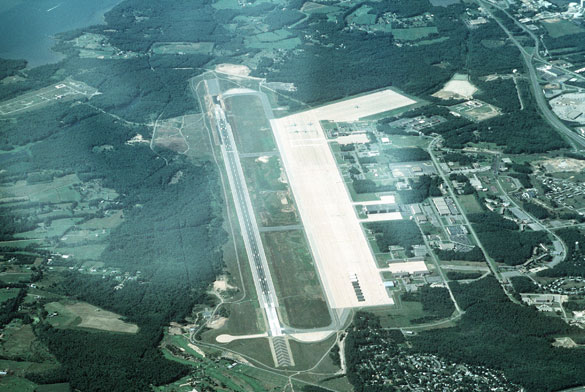 As if two official explanations were not enough, Project Blue Book then chimed in with its own explanation, claiming that the sighting probably resulted from a misidentification of a joint training mission—dubbed “Operation Big Blast”—that night between Strategic Air Command (SAC)/North American Aerospace Defense Command (NORAD). USAF Major Hector Quintanilla personally corresponded with Officers Bertrand and Hunt, informing them that, in addition to this joint training mission, five B-47 aircraft from Pease AFB were also present in the air at the time of the sighting. This abundance of aircraft in the area, Quintanilla explained, probably accounted for their strange sighting. 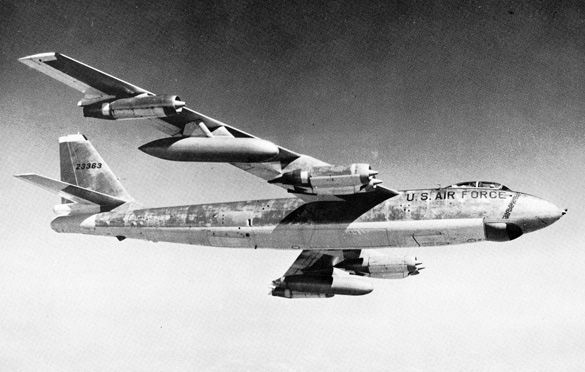 Not surprisingly, Muscarello and the two officers flatly rejected the positions of both the Pentagon and the Air Force. Bertrand and Hunt responded to Quintanilla that, in the face of extreme ridicule, the men would not have reported the sighting if they did not strongly believe that what they witnessed was decidedly not a mundane, identifiable aircraft, nor was it the result of a temperature inversion. Checking with the authorities, Bertrand discovered that in fact Operation Big Blast ended at approximately 1 am, a full hour before the unidentified object was initially sighted (this by itself does not rule out the earlier sighting by the woman in the pulled over car). Importantly, the object in question was silent, wingless, and its bright red lights lit up the entire visible area, none of which matches the description of conventional aircraft.

In addition to the Pentagon and Air Force explanations, and John Fuller’s reportage in the Saturday Review—later repurposed as his book Incident at Exeter— the New England investigator for the National Investigations Committee on Aerial Phenomena (NICAP) Raymond Fowler weighed in on the event. Like Fuller, Fowler disagreed with the authorities’ assessments, launching several experiments to test the military’s claims, including having Pease AFB light up their air field, the effects of which were witnessed by a crowd gathered in a nearby field. When nothing was seen by the crowd, Fowler demanded by loudspeaker for the AFB to turn on their lights, to which they responded that they already had. 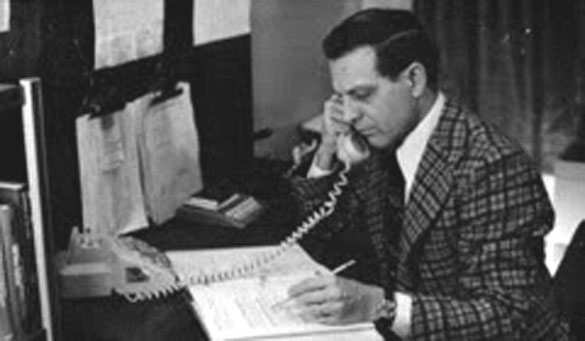 In a January 1966 letter to the two officers from Lieutenant Colonel John Spaulding, the Air Force retracted their explanations for the event and admitted to the two officers that they had no rational explanation for the object they witnessed. In a 2011 article published in the magazine Skeptical Inquirer, investigator Joe Nickell, together with retired USAF Major James McGaha, speculated that the sighting resulted from a KC-97 refueling operation. That aircraft type was stationed at Pease and, according to the authors, the red light pattern of the unexplained object matches a similar pattern of lights on the underbelly of the KC-97. Moreover, the swaying witnesses claimed to have seen, the authors argued, could have resulted from the fluttering of a refueling boom, which hangs at a 60 degree angle from the tanker. Nevertheless, Bertrand was a tanker crewman during his previous 4-year Air Force enlistment, and was therefore likely as anyone to be able to identify such an aircraft, which he didn’t. Finally, Nickell and McGaha’s explanation fails to address the silence that accompanied the object; one imagines a refueling operation would involve just a bit of noise. 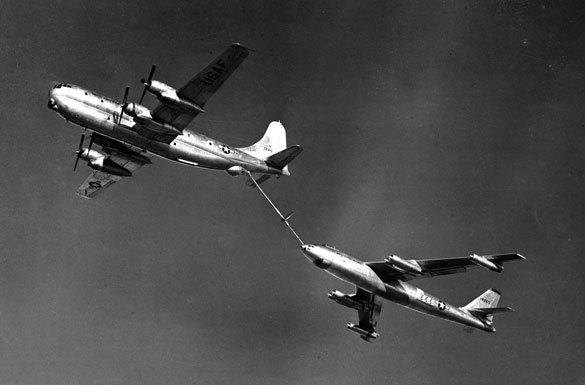 Fuller’s book was published in 1966, reaching the New York Times bestseller list and remaining, to this day, one of the most commercially successful UFO books ever published. 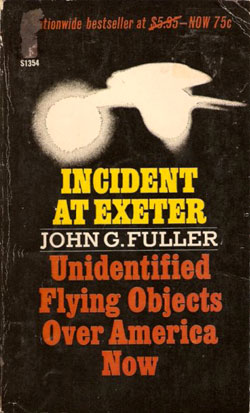 All of the principals of the case, with the exception of David Hunt and Raymond Fowler, have since passed away. 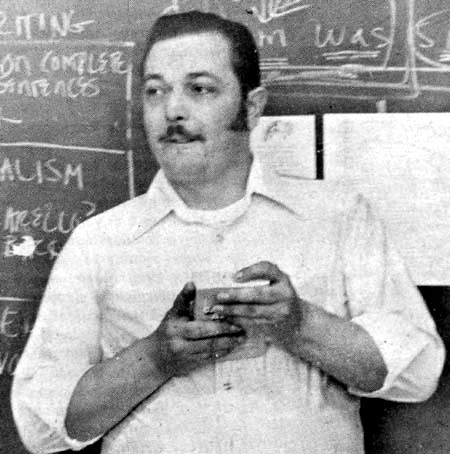 An annual UFO festival has been held in Exeter since 2009, memorializing the event. This year the event runs from September 4th to the 6th. There are well-known UFO researchers, including scientists and authors, that will give talks on the topic. (For more information, visit http://exeterufofestival.org/) 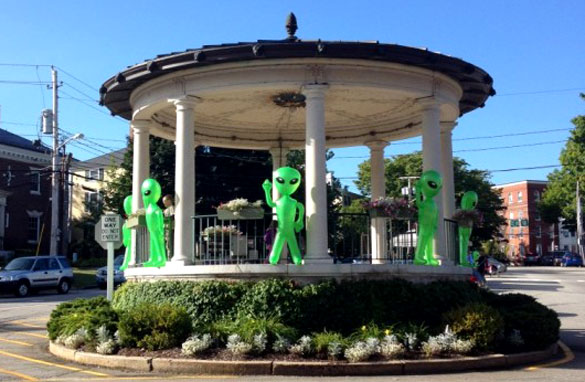