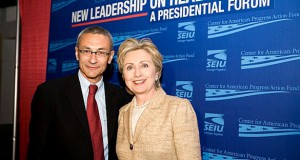 More hacked emails from the democratic party were releases by WikiLeaks in the last few days, in particular, the emails of Hillary Clinton's campaign manager, John Podesta. Podesta is a name that is often attached to the UFO issue, because he has made it no secret that he has a an interest in the topic. So it should come as no surprise that among the thousands of leaked emails, a few reference UFOs and extraterrestrials.