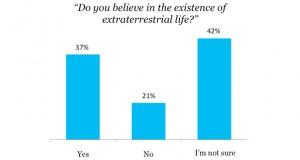 A new survey shows that atheists and agnostics are 76% more likely than Christians to believe in the existence of extraterrestrial life. Overall 37% of those surveyed were willing to say they believed in the existence of extraterrestrial life, only 21% said they did not believe. However, most people (42%) were reticent to commit either way saying the just aren't sure.