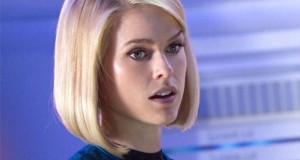 Some of the cast and crew of the new Star Trek movie, Star Trek Into Darkness, got a chance to speak to some astronauts via Google+ Hangout. The movie’s producer and director, J.J. Abrams started off the questioning asking if they had seen anything strange that makes them believe in aliens. Although the astronauts said they hadn't one of the stars of the movie, Alice Eve, says she was not convinced.

END_OF_DOCUMENT_TOKEN_TO_BE_REPLACED

A coming-of-age teenage angst comedy-drama packaged in a Sci-Fi action UFO conspiracy story, Super 8 crosses genres and generations to make a movie that is appealing to all.