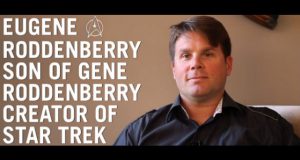 In a newly released interview, Gene Roddenberry's (creator of Star Trek) son, Eugene Roddenberry, discusses UFOs and aliens with investigative documentary filmmaker Jeremy Corbell. Eugene says neither he or his father, who passed away in 1991, saw a UFO, that he is aware of. However, he does believe in "life on other planets," and he believes one day those who are searching for life elsewhere will find it.